LeRoy Maas is leaving a legacy 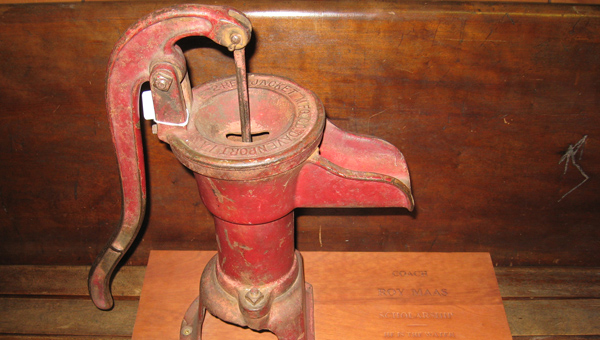 This authentic hand pump was presented to former ALHS teacher and coach LeRoy Maas in 1996. It’s now part of an exhibit at the Freeborn County Historical Museum. On the right side of the plank are the words. “He is the water that primed the pump of thousands.” -- Photo by Ed Shannon/Albert Lea Tribune

Editor’s note: This is the first of a two-part series. 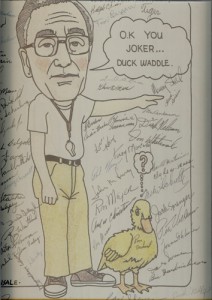 Here’s a good portion of a framed cartoon featuring coach LeRoy Maas and a somewhat confused duck. It was presented to him at a retirement party in 1980 and has the signatures of many of his former students and friends. -- Illustration courtesy Freeborn County Historical Museum

Based on his career as a school teacher, coach and city recreation director, LeRoy E. Maas has been awarded several significant mementos. Now four of those nostalgic items have been donated to the Freeborn County Historical Museum.

Also, through the years, Maas has been inducted into the Bemidji State University Hall of Fame, plus the Albert Lea High School Hall of Fame in July 2010. In addition, he’s been the recipient of other honors through the years and has also inspired honors for others. And when this year’s Albert Lea High School seniors graduate, several may be recipients of LeRoy Maas Wrestling Scholarships. This scholarship fund, created by a group of his former students in 1996, has raised about $120,000 and provided $52,000 in scholarships for 42 ALHS graduates so far.

According to Dr. Lyman K. (Manny) Steil, a famed motivational speaker and 1956 Albert Lea High School graduate, the wrestling scholarship was created in 1996 and is in part based on a sermon in a Twin Cities church.

This sermon according to Steil, one of the students inspired by Maas, was about a man named “Pecos Pete.” Here’s his interpretation of this sermon.

“Filled with enthusiasm and energy, Pecos Pete was walking in the desert until he suffered dehydration, disorientation and possible hallucination. In the desert ahead, he thought he saw a hand pump. Real or imagined? As he drew closer, Pecos Pete discovered the pump was real! In addition he discovered a bottle of water and a note. The note simply said, ‘You have a choice. You can drink the water and perhaps survive; or use the water to prime the pump and possibly drink long and deep. If you choose to prime the pump, leave water for those who follow.’” 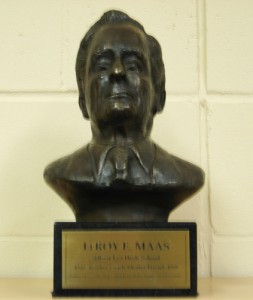 Steil added, “The pump is symbolic because as LeRoy Maas is the water that primed the pump of thousands for more than 40 years, as a teacher, coach, mentor and friend, LeRoy Maas has helped Albert Lea youth fulfill their optimal promise. The LeRoy Maas scholarships will continue to honor LeRoy Maas and prime the pump of Albert Lea students forever.”

Thus, the first item now on display near the museum’s entry is a real water pump from the past mounted on a plank.

Another donated item is a bronze sculpture. In reality, this is the second of two created by a California artist.

One sculpture was placed in Albert Lea High School during 2001. It was commissioned and donated by Frank F. Gallagher and the families of Todd Gallagher, Carolee (Gallagher) McCormick and Timothy Gallagher on behalf of the ALHS class of 1956.

Maas said the sculpture was based on photos taken of his head and shoulders from various angles and completed by Ethel Reeble, a California resident.

Frank Gallagher, a captain on Maas’ 1955-56 ALHS wrestling team, had worked for the Disney organization for 40 years and is also a founder of the LeRoy Maas Scholarship Fund. 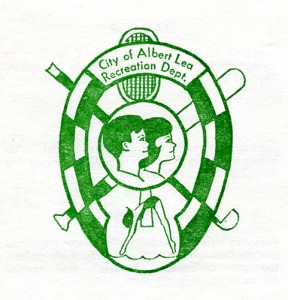 Still another donated item is a framed proclamation signed by then-Gov. Tim Pawlenty declaring Sept. 26, 2003, as LeRoy and Lillian Maas Day in Minnesota.

This proclamation was instigated by Pete Veldman who grew up in Hollandale and attended ALHS. He is also one of the founders and a trustee of the scholarship fund. What helped to make this special day possible could have been based on having Pawlenty as a student at South St. Paul High School where Veldman was a teacher and coach for years.

The fourth donated item is a cartoon depicting Maas as a coach telling a duck to do a waddle. (The duck waddle is a part of some physical education routines or exercises.) With this framed drawing created for his “This is Your Life” retirement party on June 7, 1980, are autographs on both sides by many of his former students and fellow school teachers.

“The museum is crowded for space. I’d like to give more if possible,” Maas commented in reply to a question regarding future contributions.

Pat Mulso, the museum’s executive director, said, “We’re looking to the future — our planned expansion is important because we can then continue to take in more items to help preserve the history of Freeborn County.”

Next: In part two will be more information about the life of LeRoy E. Mass, with emphasis on his 17 years as the city’s recreation director.