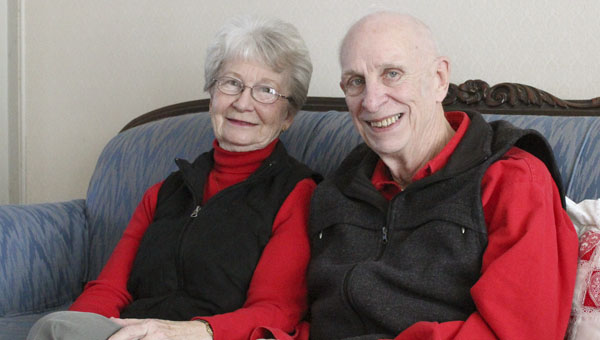 Pauline and Hugh Hall have been happily married for more than 50 years — most of those years in Albert Lea. The couple said they’ve really enjoyed the town and their life here.

The Hall’s submitted love story won first place in a Valentine contest in the Tribune. Pauline said communication has been key for their relationship.

The couple first met in St. Paul when a burst of rain made Pauline go to a church she’d never been to before. Hugh worked at the church, and they met and were engaged six weeks later.

“We spent a lot of time at the church,” Pauline said.

Pauline grew up in northern Minnesota, and Hugh had lived many places because his dad was a railrood civil engineer. The couple have five children, Kelly, Julie, Lance, Troy and Chris. They also have nine grandchildren and six great-grandchildren (with two more on the way). Pauline said she’s always enjoyed raising children, which is why the couple has done foster care and had two German exchange students.

“That was such a good experience,” Pauline said.

Hugh was the first speech therapist in the Albert Lea School District and is now retired after 37 years with the district. He said he enjoyed his work even though traveling was hard. At the time Hugh started, the system included small schoolhouses in towns around the county.

“He had a big area to cover,” Pauline said.

“I’m reading more than I ever did,” Hugh said.

Pauline likes to keep busy volunteering. She’s been a hospice volunteer for 25 years.

“I enjoy it so much,” Pauline said.

She said she appreciates that family members trust her with patients so near the end of their lives, and she enjoys listening to patients’ stories. As part of the WELCA of Salem Lutheran Church, Pauline also visits shut-ins and homebound persons.

“We enjoy our church,” Pauline said. “We’re really active there.”

Both Pauline and Hugh said they enjoyed having a cabin on Beaver Lake near Ellendale when their children were younger and said they spent a lot of time there.

“We had the most wonderful times out there,” Pauline said.

The children liked the cabin so much they never wanted to take a vacation anywhere else, so when they were grown Pauline and Hugh started traveling the country and vacationing in Mexico.

Pauline said Hugh is respectful, and she loves that he buys her clothes for her. Hugh said he’s spoiled because he’s gotten coffee in bed every day for many years. He also never forgets a holiday, birthday or anniversary, according to Pauline.

“That’s because you leave me notes,” Hugh said with a laugh.

In her submitted love story, Pauline wrote that though their story isn’t so different from many others, she wanted to take the chance to thank her valentine for being a “thoughtful, giving, patient, special husband for so many years.”

Though they’ve had their tribulations, their faith has helped them through tough times like when Hugh had a heart attack at age 43 and now that one of their sons has gone through a bone marrow transplant.

“We have a good life,” Pauline said simply.