Kevale Taylor and Nate Penz both scored 17 points a piece Tuesday for the Rochester Mayo Spartans boys’ basketball team, who shot 63 percent from the field, and beat the Albert Lea Tigers 85-59.

Along with shooting 63 percent, the Spartans excelled from the 3-point line as they made 13 threes on the night. 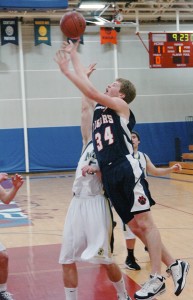 Early in the first half, the Tigers trailed by only two points with eight minutes and five seconds to go as Kyle Ooms made a two-point layup to cut the Spartan lead to 16-14.

The Tigers tried to get back into the game in the second half and outscored the Spartans 21-12 over the first nine minutes to put Albert Lea within 13 points as the Spartans led 54-41.

The Spartans responded to Albert Lea’s run as they drilled three 3-pointers in a row and pushed the lead back to 19 points.

The Spartans then outscored the Tigers 24-18 over the final 7:06 to secure the win.

“Going into the game, we knew they were capable of hitting threes,” Tigers coach Lucas Kreuscher said. “We kind of proved them right. They made 13 three’s and the frustrating thing is all of them were very open looks.”

“We were a step behind tonight that’s for sure,” Kreuscher said.

Kyle Ooms led the Tigers with 25 points and also grabbed 12 rebounds for a double-double.