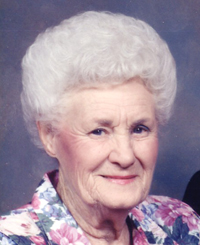 Verneal Avis (Adams) Gestie was born Nov. 24, 1917, in Sherman, Iowa, the daughter of Walter and Hazel (Feltner) Adams. She was baptized in the Methodist church and grew up in Glenville where her father was the depot agent. Verneal “Neal” graduated from Albert Lea High School with the class of 1935. On Feb. 15, 1948, she married Robert L. Gestie. Bob and Neal moved to California in 1953, where Neal worked for ASCS for nine years. Following Bob’s retirement in 1989, the couple moved back to Minnesota and purchased a condo in Fairmont. They enjoyed the winter months in their motor home in Sun City, Ariz. Neal will be remembered as an intelligent and classy lady who enjoyed reading and an occasional trip to the casino.