Robert D. “Click” Henderson, 83, of Lake Mills, Iowa, formerly of rural Emmons, died Monday, Feb. 28, 2011, at the Lake Mills Care Center. Funeral services will be at 1:30 p.m. Friday at Emmons Lutheran Church in Emmons with the Rev. Julie Fiske officiating. Visitation will be 5 to 7 p.m. Thursday evening at Mittelstadt Funeral Home, 902 East Main Street, Lake Mills, IA 50450, and again at the church one hour prior to the service. Burial will be at Oak Lawn Cemetery in Emmons. 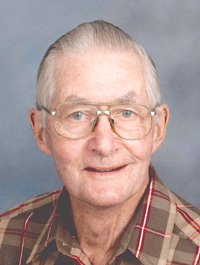 Robert D. “Click” Henderson was born Oct. 29, 1927, on a farm south of Emmons in Worth County, Iowa, where he lived until January of 2011. He was the son of Lawrence and Mae (Williams) Henderson.

He was baptized and confirmed in the Emmons Lutheran Church where he has remained an active member his entire life. He graduated from Emmons High School “Class of 1945.”

On Sept. 22, 1946, he married Dorothy Wampler. They resided on the farm where he continued farming and they raised their family. Robert also worked at the Wilson Co. in Albert Lea for 24 years.

He was preceded in death by his wife, Dorothy; son, Lynn; daughter-in-law, Corliss; and infant brother, Curtis.