A day without seeing a deer is rare

“Everything is nearly copacetic. Pa cut up all our old tires, put used oil on some rags and burned it all in his woodstove. He says if he doesn’t do that, the oil companies will win. Ma says if he keeps doing that, he’ll win alone. One of the fine Lutheran ministers in town is mad at me. It’s the one who always stands up for me by saying that whatever you think of Crandall, one of his brothers is worse.”

“What did you do to tick off the pastor?” I wonder aloud.

“He was going on and on. I was going to be late for my nap. He said that before the week was over, someone in the congregation might die. I started to laugh loudly and I couldn’t stop.”

“Why were you laughing?” I ask.

“I’m not a member of that congregation. What can I expect from a guy who doesn’t believe I golfed with Tiger Woods.”

“You golfed with Tiger Woods?” I say.

“I was golfing with this fellow and I shanked a drive. That’s my specialty, so I always have that going for me. The other guy shakes his head and says, ‘If you’re a golfer, I’m Tiger Woods.’” 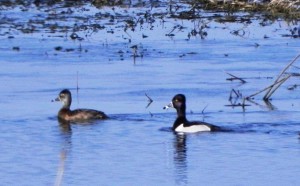 The Rev. Cherie Daniel of Freeborn called my wife and reported many swans not far from our home. Shortly thereafter, I drove into our garage. Upon my arrival home, I promptly left again — this time, taking my wife with me. I drove north towards Waseca. I pulled up behind Cherie’s car and parked. Cherie and Vernell Miller of Freeborn greeted us. I employed my binoculars and scanned the wet farm fields. Geese, ducks and hundreds of tundra swans were presented in easily digestible bursts of birding. All the waterfowl were incredibly lovely, but there is something special about swans. The big white birds brought a degree of deliciousness to my already superb day. I listened to the sounds of the swans (once called whistling swans), geese (Canada and greater white-fronted), mallards (it’s the female that quacks), and the squeaky toy call of the American wigeons (baldpates). I love the noise of birds. It keeps my ears on their toes.

It’s a rare day when I don’t see a deer. They can be hard to miss — even with a car. The bucks weigh 100 to 300 pounds, the does 85 to 130 pounds. Deer mate from November to early December with fawns born seven months later in May and June. The fawns weigh around 8 pounds and retain their white spots for approximately four months. Deer are able to run up to 40 miles per hour and swim 13 miles per hour. There are reports of deer jumping over 9-foot high fences. Deer are aged by checking their teeth, and this is a more effective way of determining the age of a buck than by its antlers. Antlers are a measure of health, genetics, nutrition and age. A deer does not have upper teeth in the front. It uses its back teeth to twist or tear plants.

The state bird of South Dakota is a nonnative, the ring-necked pheasant.

Fresh mounds of earth in fields and meadows indicate the excavations of pocket gophers tunneling below. They are signs that the frost is out of the ground.

Attila the Hun wore an image of a Northern Goshawk on his helmet.

According to the American Museum of Natural History, there are 1,232 bat species in the world.

It may sound like a burp but it is not. Go to www.bbrp.org.

“How long do bald eagles incubate their eggs?” For approximately 35 days. The eaglets fledge in 10 to 12 weeks.

“Do all birds have gizzards?” The gizzard is the muscular part of a bird’s stomach. When a bird swallows food, it travels from the throat to the esophagus. Some species have an expanded, thin-walled pouch in the esophagus called the crop where food is stored before being sent the rest of the way through the esophagus to the stomach. Pigeons and doves produce food in their crops — crop milk that is fed to the young. Birds have two parts to their stomachs. The first is the glandular stomach, where digestive enzymes are secreted to begin the digestive process. This is much like the human stomach. The second part of a bird’s stomach is the gizzard or muscular stomach. The gizzard is thick and muscular in some species, such as waterfowl and gallinaceous birds. Birds that eat hard foods such as seeds and nuts frequently pick up grit consisting of tiny stones and sand. These collect in the gizzard. When food enters the gizzard, the thick muscles and grit pulverize the food. Owls swallow small prey whole. The prey’s soft tissue liquefies in the stomach and moves to the intestines. Bones, teeth, feathers and fur collect in the gizzard. After the digestible material has emptied into the intestines, the gizzard contracts to squeeze the remaining liquid into the intestines. The owl coughs up the non-digestible material as a pellet. Every bird has a gizzard, but species that eat easily digestible foods such as soft-bodied insects, fruits or nectar may have small, thin-walled gizzards.

“Instead of comparing our lot with that of those who are more fortunate than we are, we should compare it with the lot of the great majority of our fellow men. It then appears that we are among the privileged.” — Helen Keller

“I remember a hundred lovely lakes, and recall the fragrant breath of pine and fir and cedar and poplar trees. The trail has strung upon it, as upon a thread of silk, opalescent dawns and saffron sunsets. It has given me blessed release from care and worry and the troubled thinking of our modern day. It has been a return to the primitive and the peaceful. Whenever the pressure of our complex city life thins my blood and benumbs my brain, I seek relief in the trail; and when I hear the coyote wailing to the yellow dawn, my cares fall from me — I am happy.” — Hamlin Garland