A celebration of life for Faith Elizabeth Zimmerman, of Albert Lea will be held at 10 a.m. on Saturday at Bonnerup Funeral Service, Albert Lea. The Rev. Mark Niethammer will officiate. Interment will be in Hillcrest Cemetery. 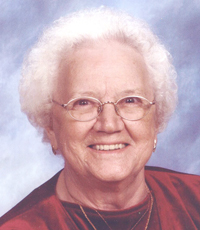 Faith passed peacefully into the arms of her Lord and loved ones on April 4, 2011. She died at the New Richland Care Center, her home since July 2010 when her health declined and she moved from Senior Towers where she had lived for six years.

Faith was born March 6, 1930, in Albert Lea. Her parents were Ross and Nylene Asher. She was a 1948 graduate of Albert Lea High School. Faith married Pete Zimmerman on Dec. 21, 1954, and together they owned and operated Zim’s Inn and Pete’s Tap in Albert Lea, and The Circus Tap in Northwood, Iowa. They moved from Albert Lea to Northwood in 1971.

Pete and Faith were the parents of two children, Amy Jo and Scott. Faith was a supervisor at Carroll George in Northwood, Iowa, retiring at age 70. Faith was passionate about Texas hold ‘em poker, often traveling to River Boats for “a good game” and most recently to Diamond Jo Casino to play cards with her friends in the poker room.

Faith is survived by her daughter and best friend, Amy Jo Johnson, and her husband, Curt, of Ellendale; son, Scott Zimmerman, and his wife, Charli of Festus, Mo.; her grandchildren and greatest joy: Maegan Zimmerman (Michael Marcon) of Altoona, Wis., and her grandson, Thomas Carmody (fiancé Kristy Strom) of Waterloo, Iowa. Faith is also survived by her sister and best friend, Rosslyn Cameron, of Albert Lea, who traveled the journey to the very end; sisters: Joan (Bernard) Wehner of Austin, Lola (William) Minwegen of Florida; and brothers: Robert (Marty) Asher of Texas and David (Janice) Asher of Washington. Also three step-grandchildren: Tom Mann, Kellen Johnson (Ashley) and Cole Johnson. “Auntie Fee” will always be in the hearts of her special nieces, nephews and their children. She loved them all dearly. Faith is also remembered by her life long best friend, Beverly Head of Albert Lea.

Faith was a survivor, spirited, witty and joy-filled. Those who love her, cared for her and who have the honor to have known her are blessed.

In lieu of flowers, memorials suggested to the family.