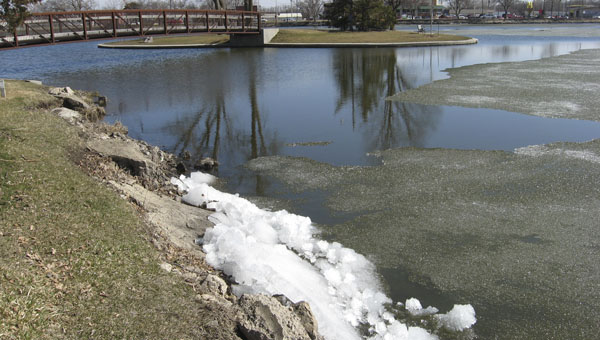 This photo, taken Wednesday afternoon near the Katherine Island Bridge, shows the chunks of ice blown up on the shoreline by the winds on Fountain Lake. By Thursday morning this reminder of ice had melted. -- Ed Shannon/Albert Lea Tribune

Friday, April 8, will be recorded as Fountain Lake’s ice-out date for 2011, according to Bill Malepsy, the city’s lake ice observer since 1969. This is the 42nd year he has performed this public service.

He said the last slivers of honeycombed ice melted away in Edgewater Bay in the portion next to State Highway 13 and across from Bayview-Freeborn Funeral Home and the Union Center around 7 p.m. Friday.

The earliest ice-out date for Fountain Lake since 1912 is March 7, 2000. That year the last patches of melting ice were in both Dane and Edgewater Bays. The latest recorded ice-out date for this lake is still April 30, 1953.

This is the 99th year of the formal listing for ice-out dates for Albert Lea’s centerpiece lake.

Murtaugh was the owner and operator of the Casino, a lakeside dance hall and rowboat rental service at the north end of Newton Avenue in 1912. The melting of the ice cover on Fountain Lake was a prime business concern for Murtaugh. Thus, in the spring of 1912 he started to record the date the lake would be entirely free of ice. He reportedly would paddle a canoe all the way around the lake’s shoreline, including the bays, to check on the status of the hopefully ice-free surface.

Now the ice status is checked by driving around the lake and checking on places like Dane Bay, Edgewater Bay and the Bancroft Channel. Also, Malepsy has several friends who help him with watching the status of the lake’s ice-out status.