EMMONS — When the former members of Lime Creek Lutheran Church want to revive memories of an era when they observed Easter at this rural place of worship, they have two options.

One is to go three miles west of Emmons on State Line Road (County Road 4) to a place that has an arched entry marked with the words The Lime Creek Cemetery on top. This cemetery is divided into two parts. In the center beyond the arched entry is a marble marker and a large grassy area. The church, built in 1874 for worship services and as a community center by pioneer Norwegian-American families, once occupied a good portion of this space.

The other option is to go west about eight miles on the State Line Road and into Faribault County. At this point and to the north across farm fields can be seen a large white wooden building with the distinctive appearance of a church. In reality, that building a half mile away is Lime Creek Lutheran Church, now a part of farming of yesteryear.

A relocation of the church building from Mansfield Township took place in March 2003. The last service in the church was held on Oct. 9, 1983.

This undated photo of the Lime Creek Lutheran Church, three miles west of Emmons, was taken more than a century ago as people were preparing for a funeral service. Proof of this can be seen with the presence of a hearse in the lower left corner. A point of interest are the decorative details on the church’s spire. -- Photo courtesy Freeborn County Historical Museum

Now the site of this former church still serves as a cemetery for so many deceased members of area families.

One person buried in this cemetery is Rev. Paul G. Ostby who served as the church’s pastor from 1878 to 1915. His grave site is in the very southeast corner.

Ostby was born during 1836 in Trysil, Norway. He came to the U.S. in 1868, attended seminaries in Illinois and Wisconsin and was ordained as a Lutheran minister in 1870.

During his career as a pastor Ostby organized or served at least 30 churches in Minnesota and Iowa.

The busy pastor finally decided to concentrate his activities to the border area between Albert Lea and Lake Mills, Iowa. As a result, the Ostby family lived on a farm in Mansfield Township not far from the Lime Creek Church. 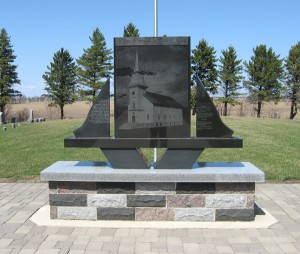 A marble marker dedicated in 2004 now serves as a reminder of the Lime Creek Lutheran Church that was once located at this place on the State Line Road three miles west of Emmons. -- Ed Shannon/Albert Lea Tribune

During his years as a Freeborn County resident, Ostby also organized and served as the pastor of Bethel Lutheran Church in Vinje, Iowa, from 1878 to 1915.

In 1902 he helped to organize the Emmons Lutheran Church until 1915.