“Everything is nearly copacetic. My TV remote has wheels. I want you to sign this petition to make the metric system our official form of measure. I support the metric system every inch of the way. I’m kidding. I’m old school. I might still be a sophomore. This petition is to demand that the Bottomless Pit (where red meat is not bad for you, but the fuzzy green meat is) serve tater tot hot dish at least three days a week. I’ve found one of the secrets to happiness is to wear a hat in my house. That way, if someone I don’t want to see comes for a visit, I can tell him that I’m just leaving. If someone comes that I want to see, I tell him I just got home. That’s just another example as to how I’ve received more than my fair share of wisdom. I’m going to Gary’s Grocery and International Airport and ask for my money back on that gourmet dinner basket I bought there.”

“Wasn’t it any good?” I wonder aloud.

“It was delicious. I ate the whole thing in one sitting.”

“Then what was wrong with it?” I ask.

“It was supposed to serve four.” 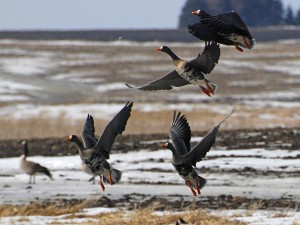 “Do robins feed on suet?” Yes, particularly on bits of suet that have fallen to the ground after being freed by hungry woodpeckers. This is especially true when earthworms are not yet readily available. Robins are uncommon visitors to suet feeders.

“What kind of a goose is a specklebelly?” It’s the greater white-fronted goose.

“A crazy robin is bashing into my window repeatedly. What can I do?” It’s likely a male that feels a powerful urge to chase other males away from his territory. The window turns into a mirror at times when the light hits it right. When a territorial bird sees its image in a reflective surface such as a window or the mirror of a car, it perceives its reflection as a rival and tries to drive the intruder away. This is how the fight starts. Reflections in windows refuse to retreat, so the fight continues. When the robin assumes an aggressive pose, so does his opponent in the glass. Cover the outside of the window with a screen, soap, cardboard, painter’s drop cloth, wax paper, spray frost or opaque plastic that breaks up the reflection. If you cover the inside of the window, draw the blinds or close the curtains, it aggravates the problem because it enhances the mirrored image. If the robin is intent on finding a fight, it will search for imaginary opponents in other windows. I’ve had robins fight with the outside mirrors on a car. I covered the mirrors with a bag held in place by a rubber band until the robin’s hormonal level dropped or he became too busy with nestlings.

“I’ve been watching the eagle cam at http://www.raptorresource.org/falcon_cams/index.html and wondering if when the eagle chirps is he/she calling his/her mate to take over the incubation duties?” Bald eagles don’t have a wide range of calls, but the ones they have carry long distances. They often toss their heads back when calling while perched. Calls can be given in greeting, as a declaration of food ownership, as a demand to a mate, as a warning to visitors to a roosting site or as a threat to an intruder in the eagle’s territory. I suspect the calls on a nest are in greeting, a demand for a break from incubation responsibility or an expression of hunger. The calls always sound as if they require immediate action.

“How long do great horned owls nest?” They don’t build their own nests. They use the nest of another species where, normally, two to three eggs are incubated for 28 to 35 days. Owlets stray from the nest onto nearby branches in 6 to 7 weeks. These “branchers” cannot fly well until 9 to 10 weeks old. Families remain loosely associated during the summer before the young disperse in the fall.

“Last year we had a dearth of orioles and the year before they were everywhere. Any insights?” Birds want to fly with tailwinds and avoid headwinds. After a cold front passes through in the spring, birds are forced to land because of the difficulty in flying. This is when we see many birds. Orioles eat insects, such as caterpillars, that don’t hatch until buds emerge. Because of this, orioles wait until leaf-out to return to Minnesota. Most orioles fly at night, resting and feeding during the day. An oriole travels about 150 miles each night at a speed of around 20 miles per hour. Migrations vary from year to year depending on the weather. I look for them when there are apple blossoms, and I find plum thickets are great places to see orioles. I hope you see a ton of orioles this year. That would be approximately 25,000 orioles.

“What is the difference between a beak and a bill?” Nothing.

“How long do American robins live?” The average is about two years. Only about 25 percent of robins that hatch survive until their first birthdays. The oldest wild robin recorded lived 13 years and 11 months.

“When should I put out my hummingbird feeders?” May 1 is a good date.

“How can I tell male robins from females?” Male robins are more brightly colored than females. They have a blacker heads and tails, rustier breasts, and more black and white streaking on the throats. The first robins to return in spring are males.

A study done by researchers from the Smithsonian Institute and Towson University on the mortality of baby gray catbirds in the suburbs of Washington, D.C., was published in The Journal of Ornithology. Predators killed nearly 80 percent of the young birds. Cats were responsible for 47 percent of the deaths.

“There is nothing in which the birds differ more from man than the way in which they can build and yet leave a landscape as it was before.” — Robert Lynd