Some birds exercise their voices before sunrise

“Everything is nearly copacetic. I just made $30,000. I had to cheat at Monopoly to do it, but it was worth it. It snowed 2 feet at my place. That would be 3 inches anywhere else. I lost my car keys in the snow but didn’t look for them. It’s better to have loafed and lost than never to have loafed at all. I should buy a new car. I’ve been looking at one of those hybrids but they are so expensive. If I want economy, I’ve got to pay for it.”

“I went to see Doc Splint Eastwood. The old quack gave me a thorough examination and then gave me a pill big enough to choke a horse. Splint told me that he’d be right back with some water. I waited and I waited. I’m not known for my patience. I hobbled out to the drinking fountain, forced the pill down my throat, and washed it down with enough water to float a boat. I limped back into the examining room. Splint returned with a big bucket of warm water and told me that after the tablet dissolved in it, I should soak my leg for 30 minutes.”

A yard of birds

A canorous collection of birdsong greets me each morning. I am pleased that none of the tweets is limited to 140 characters. Some of the birds exercise their voices before the sun appears. They give me cause to join the choir. I whistle a happy tune, albeit it off-key. Light brings identity to the members of the morning chorus. Some of the beautiful avian visitors demand my attention. My father called them “mustard heads.” They are yellow-headed blackbirds. This bird is one of my favorites. When I was a boy, I called them, sometimes to my mother’s chagrin, the “constipated blackbirds” because of the call they made from the hemi-marsh. A hemi-marsh is approximately 50 percent water and 50 percent emergent vegetation. The yellow-headed blackbird’s song isn’t the loveliest of songs, but I’m happy to hear it. 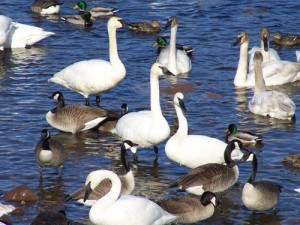 I saw the movie “On Golden Pond” recently. It came out in 1981 and starred Henry Fonda, Katherine Hepburn, Jane Fonda and Dabney Coleman. I liked the movie then, and I liked it now. Loons played a vital role in the movie. Ethel (Hepburn) said to her husband, Norman (Henry Fonda), “Come here, Norman. Hurry up. The loons! The loons! They’re welcoming us back.” She also warned Norman, “Don’t be such an old poop!”

I once rescued a loon that had mistaken the shimmering surface of a parking lot after a rain for a lake. Unable to walk on land, the loon was stranded. Some thought it was lunacy to attempt to save a loon — a loon equipped with a dagger-like bill. I believed it was loonacy.

For lunatics or loonatics, there is place to see nesting loons on a small man-made island meant for nesting loons in Minnesota at www.mnbound.com/live-loon-cam.

It was so windy that my car did not want to travel in a straight line. A plastic bag displayed flying skills that its designer had never dreamed of. I watched tree swallows doing aerial acrobatics and turkey vultures performing a ballet in the sky. Small birds flapped madly without getting anywhere — hovering without intent. The wind wins some.

I was in a blind along the Platte River in Nebraska. I was there to watch the gathering of the sandhill cranes. An amazing wildlife spectacle was taking place on a cold March morning. As I thought warm thoughts, I squinted out of the blind and noticed movement. As I stared at the moving creature, I was able to discern a skunk in the gathering light. The skunk headed toward the blind, a blind with holes large enough to allow the entrance of a skunk. As I watched the skunk, I noticed the skunk was being tailed by a coyote. The skunk found the blind interesting and the coyote found the skunk interesting. They came close enough that I could hear footfalls as loud as theater popcorn being chewed during a sad movie. The skunk snuffled about the outside of the blind and used a threatening posture to keep the coyote at bay. Finding the blind less a thrill than it had hoped, the skunk ambled away. The coyote followed. It was a great day. I saw countless cranes and avoided being skunked.

“Is it OK to put out dryer lint for the birds to use in their nests?” I don’t recommend it. Dryer lint from synthetic fibers tends to become brittle after it’s rained upon and dries. Some laundry detergents and fabric softeners may leave harmful residues.

“What do trumpeter swans eat?” Adult swans eat aquatic vegetation, including the leaves, seeds, stems and roots. Wild celery and the tubers of duck potato and sago pondweed are important foods on a swan’s diet. They use their feet to dig into a lake bottom and uproot plant material, employing their long necks to consume the food underwater. They have adapted to feeding on grains and vegetables left in fields after harvests. Young cygnets eat mainly aquatic insects and crustaceans.

“I see yellow-rumped warblers much earlier than any other warbler. How do they survive in the cold without insects to eat?” This tiny bird, nicknamed “butter-butt” is omnivorous. People regularly report seeing yellow-rumps feeding at suet feeders and eating the seeds of last year’s flowers. The yellow-rumped warbler winters farther north than any other warbler. It has a slightly stouter bill and a digestive system unique among warblers that allows it to eat the waxy berries of such plants as bayberry, poison ivy, juniper and cedar.

Albert Lea Audubon will have a carpool trip to Earl and Penny Jacobsen’s Nature Preserve and Scenery Farm near Spring Valley. The group will gather in the northeast parking lot behind Shopko at 10 a.m. on Saturday, May 7, and carpool from there. Maps will be available for the drivers. There is no cost other than chipping in for gas.

“Is there anything more beautiful in the world than to sit before an open window and enjoy nature, to listen to the birds singing, feel the sun on your cheeks.” — Anne Frank

“The three sentences that will get you through life. Number one, ‘Cover for me.’  Number two, ‘Oh, good idea, boss.’  Number three, ‘It was like that when I got here.’” — Homer Simpson