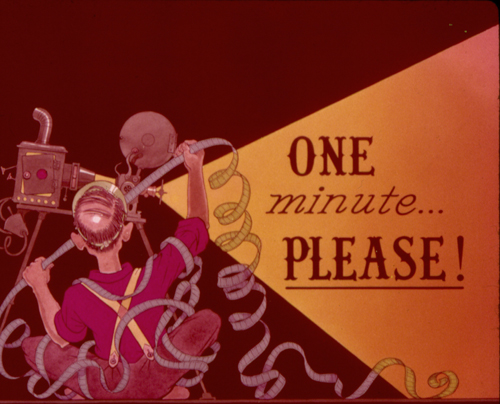 This slide projected on the screen during the silent film days, and maybe even later, helped to hopefully explain an interruption in the presentation of a movie. In reality, it might take more than a minute to clear up this particular situation.

Among the historic scenes from the past in the collection of slides used by the late Bidney Bergie for his shows are several scenes once used for silent film presentations in local theaters.

There’s an interesting contradiction with this slide once used on the screen in a local theater. Some folks might consider the afternoon ending about dinner time and 7 p.m. being a part of the evening.

The intention for these messages shown on the screens of those theaters a century or more ago was to inform the audiences of changes in the film presentations or messages of interest. For example, many of the films in that era were based on two or three reels. Thus, a message shown on the screen could inform those watching the film that there would be a short intermission while the operator put a new reel in the projector. 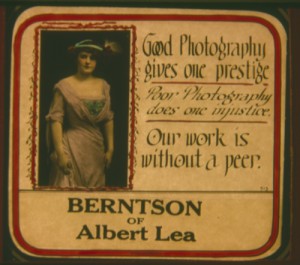 One of the first advertisements to appear on a local movie screen was for Berntson Photography, 115 S. Broadway Ave. According to a notation on this slide in Bidney Bergie’s collection, it was used during 1905 at the Broadway Theater.

Other slides shown asked audience members not to throw trash or leftover food on the floor and to inform the staff of any illegal or foolish activities while the lights were dimmed.

Some of the slides had humorous aspects. One of the slides in Bergie’s collection was based on the projectionist being tangled in film. This was intended to hopefully explain an interruption in the film’s presentation. 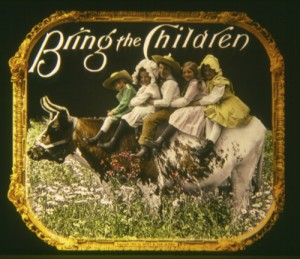 This slide projected on the screen at a local theater might have once been used to promote a film intended for children. By the way, this cow seems to have been a mighty patient critter. 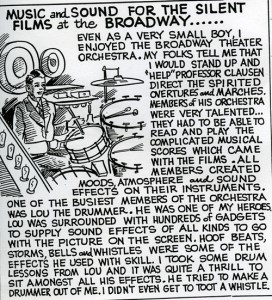 One of the last Hi-Lites and Shadows of Yesterday and Today illustrated features the late Irv Sorenson created for the Tribune in 1965 helped to explain how sound effects were added to the silent films shown at Albert Lea’s Broadway Theater.