Birds can make up a band with all their sounds

“Everything is nearly copacetic. I had pancakes, eggs, hash browns, ham, sausage, bacon, toast and cinnamon rolls for breakfast. Order what you want. Eat what you get. It was good grub, but now I’m feeling less than perky.”

“No, I had breakfast over at the café. I ate with Hal E. Lewya, the pastor from First Uffda Church. He asked me if I believed in climate change. I don’t even believe in changing my socks. The weather does seem to be getting angrier. I hope it wasn’t something I said. Hal E. Lewya is hard to talk with. He’s so hard of hearing that he once said his prayers while kneeling on a cat. I’m helping him fix the roof on the parsonage. I thought he’d be like a fish climbing a tree, but he’s up there hammering away as if he knows what he’s doing. He told me that I didn’t need to help anymore. He could finish it alone. I think I’ll hang in there for a bit.”

“You’re passing up a chance to sidestep work?” I wonder aloud. “Why would you do that?”

“I’m waiting to hear what a preacher says when he hits his thumb with a hammer.” 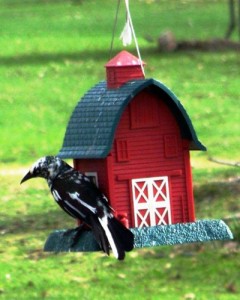 Photo of a piebald common grackle by Joyce and Bob Street, of Hesper, Iowa. -- Submitted photo

We met at a park. We were a group interested in nature. An Audubon Club. We gathered proper firewood and made ready to start a fire for a weenie/marshmallow roast. We looked forward to eating outdoors.

There were no hotdogs devoured. Two barred owls flew close to us and landed in trees. One of the owls called, “Who cooks for you, who cooks for you all?”

And the band played on

I’ve heard them. The loon howling like a feathered wolf. The white-throated sparrow whistling, “Old Sven Peterson, Peterson, Peterson.” The winter wren singing a song much bigger than the bird itself. Washington Irving said, “The happiest bird of our spring is the bobolink.” William Cullen Bryant wrote, “Merrily swinging on brier and weed, near to the nest of his little dame, over the mountain-side or mead, Robert of Lincoln is telling his name: Bob-o’-link, bob-o’-link, spink, spank, spink.” The yellow rail sounding like two small stones being tapped together. The cardinal calling, “Birdy, birdy, birdy.” The garooing of the sandhill crane. The robin singing, “Merrily, verily, see?” The chickadee vocalizing its name. Is one avian songster more talented than the rest? Maybe to a trained musician. In this case, beauty is in the ear of the beholder. To a birding bum like me, each bird is an irreplaceable part of the world’s grandest choir.

Bob Russell, of the U.S. Fish & Wildlife Service, showed me a passenger pigeon decoy that he’d purchased at a flea market. The passenger pigeon was once likely the most abundant bird species on the planet. Alexander Wilson estimated that one flock consisted of two billion birds. Passenger pigeons became extinct in 1914. Herter’s made Bob’s decoy in the 1960s. Herter’s was an outdoor sporting goods store begun by George Herter in Waseca in 1937. It sold gunstocks, canoes, game calls, archery gear, fishing supplies, hunting equipment, traps, snowshoes, “Grizzly Bear” pipe tobacco, clothing, decoys, and in its later years, snowmobiles. The “world famous” catalog arrived regularly in our mail and a pilgrimage to the Herter’s store in Waseca was a celebration of the unusual. I remember seeing a store display of small, round rocks sold as ancient hunting weapons. I bought “Grizzly Bear” tobacco for my pipe-smoking father-in-law. Herter wrote many books. The most famous of which is likely “Bull Cook and Authentic Historical Recipes and Practices.” One chapter was titled “How to Kill a Wild Boar with a Shirt.” A friend who enjoys Herter’s books told me that they read as if Cliff of “Cheers” wrote them. George knew everything. The same friend sent me his favorite Herter quote, “Being eaten alive by hyenas is less painful than you’d think.” Herter was a promoter who could spin a tale. The name Herter’s is still out there, but it’s no longer in Waseca. Herter’s went bankrupt in 1981. I miss getting the catalog in my mailbox.

“My grandmother talked about a dogwood winter. What is it?” It is folklore common in the eastern United States that describes cold weather that occurs after the dogwood trees have bloomed. If the blackberry bushes were blooming when the cold snap hits, it is called a Blackberry Winter. One day it’s spring and the next day it’s winter again. There is also something called a Linsey-Woolsey Britches Winter. It is a late cold snap that is the last time in spring that long johns need to be worn. Linsey-woolsey was a strong, coarse fabric of wool and cotton or wool and linen.

“I found a baby bird. What should I do?” It is common for chicks to venture from their nest before they are capable of flight. Some fall, some jump. The parents care for them during that time. If the young bird is in imminent danger, such as from a cat, shoo the cat away and move the bird to nearby shrubbery or another safer place. It’s a myth that parent birds will abandon a baby if you touch it and/or if they smell your scent on it.

“So extraordinary is Nature with her choicest treasures, spending plant beauty as she spends sunshine, pouring it forth into the land and sea, garden and desert. And so, the beauty of lilies falls on angels and men, bears and squirrels, wolves and sheep, birds and bees.”— John Muir

“Never bear more than one trouble at a time. Some people bear three kinds — all they have had, all they have now, and all they expect to have.” — Edward Everett Hale