HAYWARD — Sometime in the near future the large sign next to County Road 102 (215th Street) two miles east of Hayward is going to be changed from Staven Stables to Cowboys and Angels.

The new owners of the horse stables, David and Jill Suess, are planning two open houses in early June and more emphasis on equine activities for the public. 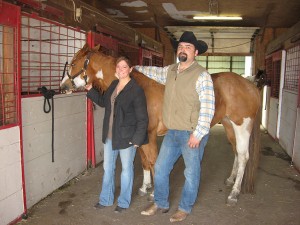 Jill and David Suess pose with one of their favorite horses, 6-year-old Angelina, at their Cowboys and Angels Stables two miles east of Hayward. -- Ed Shannon/Albert Lea Tribune

“We are a full service barn. We offer sales, breeding, boarding, lessons, training, pretty much everything you can imagine. … We already have some (Riverland) college kids (from Austin) that have discovered us and come out on weekend nights. What a great alternative to spend an evening! We have an indoor arena so you can always ride no matter what the weather is outside,” Jill said.

“We wanted a change in area. We like the people here, and Albert Lea is a great town with plenty of horse lovers,” David said.

This stable operation has two barns with a total of 16 stalls. He added that another four stalls, plus an office and a “country store” will evolve after a summer remodeling project in the third barn.

Incidentally, the couple stress their last name is spelled Suess and pronounced somewhat differently than that of Dr. Seuss, the author of children’s classics which have also inspired a series of film cartoons. 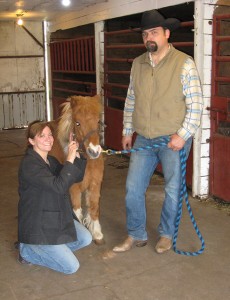 To help emphasize the size of a horse breed called a mini, Jill Suess kneels next to Ginger, one of the permanent residents of Cowboys and Angels Stables east of Hayward. Holding the horse is David Suess. This new stable operation replaces the former Staven Stables. -- Ed Shannon/Albert Lea Tribune

Cowboy and Angels has the indoor arena, an outdoor arena that’s being developed, and two options for horse trimming, one is a natural trimmer and the other is a farrier (a person who shoes horses), plus the services of an equine chiropractor and a veterinarian.

The Suess herd presently consists of nine horses and three smaller ones they call minis (and they avoid the use of the word Shetland). Also, there will be three new colts and a mini added to the herd early next year. Extra horses at the stables, both inside and outside, are boarders and owned by other people.

“I want to add a longhorn steer and several llamas and pygmy pigs to our place,” he explained. And not long ago he added a black lab named Lexi, six months old, to the family’s life.

She said Cowboys and Angels will be working with Community Education of both Albert Lea and Austin this summer to provide horse riding and camping opportunities.

“You can bring a horse or rent one,“ she added.

Two open houses are being planned for next month. One is tentatively scheduled for Thursday, June 2, from 4 to 7 p.m. and the second takes place on Saturday, June 4, from 11 a.m. to 7 p.m. There will be free food and pony rides on both days, Jill said.

This people and horse friendly place is located on County Road 102 (215th Street) two miles east of Hayward and next to the frontage road just north of Interstate 90. Access can be achieved by taking the Hayward Exit on I-90 and going north on County Road 26 and turning right onto the first gravel road.

“We’re easy to find and hard to leave,” David concluded.