Spring was reluctant this year

“Everything is nearly copacetic. I just got back from Arkansas. I was in the city of Burnt Mattress for a family gathering.”

“Burnt Mattress, Arkansas? Where is that located?” I say.

“It’s right above Hot Springs. Aunt EmmyIou told me to go find my Uncle Lemuel and tell him that she had made a mess of cathead biscuits. She said he was out in the pasture with the cattle. I walked to the pasture, climbed over the fence, and it wasn’t long before I saw Lemuel pretending to work while seated on his old John Deere. That tractor is so old that it has turned from green to red. I’d just started walking toward Lemuel when he saw me coming.”

“No, he shut the tractor off and yelled howdy in my general direction. It was about then that I became aware of an angry looking bull not far from me. The critter gave me the evil eye, snorted, and pawed the ground. I called out to Lemuel and asked him if the bull was safe. Lemuel spit out a stream of tobacco and said, ‘That bull is as safe as can be. I can’t say the same about you.’”

I was seated in St. John’s Lutheran Church in Elkton. I was eating tater tot hotdish. Ambrosia. The company was as good as the food. I looked out the window and saw American redstarts, Wilson’s warblers and yellow warblers flitting through the trees outlining a river. I enjoyed the antics of an eastern phoebe as it snagged flying insects. An old beer TV commercial showed guys sitting around and drinking beer. One of them said, “It don’t get no better than this.” As I dined on fine fare in a beautiful church, enjoying the camaraderie of good people, and watching flying feathered jewels, I knew that man was wrong.

It had been a reluctant spring. It stayed cold too long and became hot too soon.

The world was greening and singing. Spring is when the entire world goes, “Chirp!”

The haunting song of one of the birds that began before six in the morning caught my attention. The wood thrush broke the stillness that had defined the night. Donald Culross Peatitie wrote, “One can never hear the thrush without feeling an intense sense of solitude.” “Ee-oh-lay” was the flutelike call of the thrush that echoed through the trees and rested pleasantly in my ears. 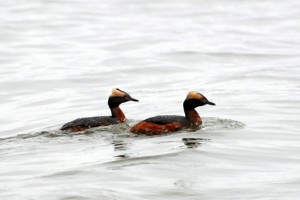 Photo of horned grebes by Darcy Sime of Alden.

The new day searched for form. There would be raisin bran, toast with peanut butter, orange juice and tea. There would be a book to read and a radio to listen to as I ate breakfast. Those were givens. I had a busy day scheduled. More work than I could do, I feared. As I wondered how I could accomplish all that needed doing, I peered out a window. Colors danced. Orioles, grosbeaks, finches, buntings, jays, woodpeckers, cardinal and tanager. Robert Frost wrote, “Tree at my window, window tree.” I had birds at my window. Bluebells bloomed in the yard. The blue of the flowers defied description. A monarch butterfly fluttered by. Then another. The first monarchs I had seen this spring. There they were, right on time — May. They were miracles on wings. The butterflies accomplish impossible tasks every year, why shouldn’t I?

The dodo went extinct in the 1640s. The curators of a museum in Oxford, England, destroyed the last stuffed specimen of a dodo in a bonfire in 1775. They had decided that the bird had become tatty.

A legend from the early cultures living in the central highlands of northern Mexico is that in the fall after the hummingbirds had finished nesting and the flowers had finished blooming, hummingbirds flew to the branches of trees. There, they hung by their beaks and dried up. They remained lifeless throughout the winter, dangling from branches like desiccated leaves. In the spring when the rains came, the hummingbirds soaked up the rain and came back to life.

The Lower Rio Grande Valley of Texas has the only accepted established wild populations of red-crowned parrots and green parakeets in the U.S.

The larger the garden seed, the longer it remains viable.

All day the mockingbird has owned the yard. As light first woke the world, the sparrows trooped onto the seedy lawn: the mockingbird chased them off shrieking. Hour by hour, fighting hard to make the world his own, he swooped on thrushes, thrashers, jays, and chickadees — at noon he drove away a big black cat. Now, in the moonlight, he sits here and sings. A thrush is singing, then a thrasher, then a jay — then, all at once, a cat begins meowing. A mockingbird can sound like anything. He imitates the world he drove away so well for a minute, in the moonlight, which one’s the mockingbird? Which one’s the world?

This is from “The Unleashed Mind” by Shelley Carson. “Many highly creative people display personal behavior that sometimes strikes others as odd. Albert Einstein picked up cigarette butts off the street to get tobacco for his pipe; Howard Hughes spent entire days on a chair in the middle of the supposedly germ-free zone of his Beverly Hills Hotel suite; the composer Robert Schumann believed that his musical compositions were dictated to him by Beethoven and other deceased luminaries from their tombs; and Charles Dickens is said to have fended off imaginary urchins with his umbrella as he walked the streets of London.”

“We live in a wonderful world that is full of beauty, charm, and adventure. There is no end to the adventures that we can have if only we seek them with our eyes open.” — Jawaharlal Nehru

“If men could regard the events of their own lives with more open minds, they would frequently discover that they did not really desire the things they failed to obtain.” — Andre Maurois