Editor’s note: This is the second of a two-part series.

Albert Lea’s City Arena is now used for a variety of sports activities. Yet, four decades ago this building west of the city was the place where several college graduations were held. All this came about because the present City Arena was then known as the Field House and on the campus of Lea College.

Here’s another view of the 1971 Lee College graduates on their processional march on the campus walking path between Christopherson Hall and the Field House. -- Photo courtesy Freeborn County Historical Museum

One of the preliminary events for this graduation was a banquet held at Bethany Hall, a part of First Lutheran Church, the previous evening.

The Tribune reported that on the afternoon of this significant event, “The graduates entered the Field House following what is becoming its traditional parade down the hill from Christopherson Hall.” Dr. Delta Gier, academic chief of the college, led the graduates’ march and presented the candidates for degrees. Dr. Quentin Hartwig, departing chief administrative officer, conferred the degrees. 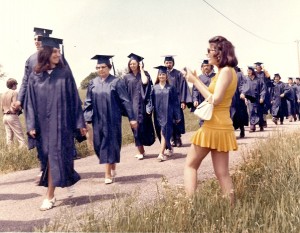 One of the preliminary parts of the 1971 graduation at Lea College was a processional march from Christopherson Hall to the Field House. During this march the young lady in the orange dress was taking a photo of a graduate who was either a friend or relative. -- Photo courtesy Freeborn County Historical Museum

David Wicks of Albert Lea, president of the Lea College Board of Trustees, gave the welcoming address to the graduates. The main speaker was Minneapolis businessman Benjamin Berger.

A good portion of those graduates were from other parts of the nation, especially Illinois, New York and New Jersey. However, there were also 1971 graduates from this area. They were: James Daley, Hugh DeWitt, Elaine Nelson, Joan Rogers of Hayward, James Becker, George Bruns, Thomas Fabry, Dorothy Brownstone of Clear Lake, Iowa, Carol DeBoer of Hollandale, Thomas Hoy and Robert Pumphrey Jr.

There were also three more names on the Tribune’s list of Lea College graduates with both local and family connections.

This aerial view of the Lea College campus west of Albert Lea was taken in the early 1970s. A was the Field House, now the Albert Lea City Arena. B is what was then Christopherson Hall, now Lake Chapeau Condos. And C is the walking path that one served as the most direct connection between those buildings. Today, there’s no trace of this shortcut path. -- Photo courtesy Freeborn County Historical Museum

Mr. and Ms. Clayton Slater of Albert Lea actually had four college graduates to honor in 1971. Their son, Steve Slater, his sister, Nancy and her husband, Lawrence O’Toole of Glen Elyn, Ill., graduated from Lea College that day. And another daughter, Kathy Slater, graduated from Mankato State College a week or so later. 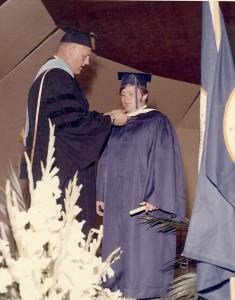