Keeping an eye out for chimney swifts

“Everything is nearly copacetic. Hoover! That’s a big dam. I’m trying to cut back on my cussing. I’m still making payments on a glazed doughnut. I’m trying to get a government grant to learn how to get government grants for getting government grants. I’ve never made enough money farming to stick with it, but I’ve never lost enough to get out of it. I couldn’t get a buck from the devil’s horse. I decided to diversify and raise a few sheep. I bought a fine ewe and she gave birth to two lambs. I didn’t have a proper pen in which to keep them and one of the lambs disappeared. I figured I’d rather have one fat lamb than two skinny ones. I put off building a fence. A few days later, the second lamb vanished. I decided I’d rather have a plump ewe than one worried thin mothering her lamb. I’d save up and buy a ram. I determined there was no point building a fence until then. A couple weeks later, I discovered the ewe was missing.”

“That’s a shame,” I commiserate.

“Things happen for a reason. I know it’s all for the best, but I’ll be doggoned if I can figure out how.” 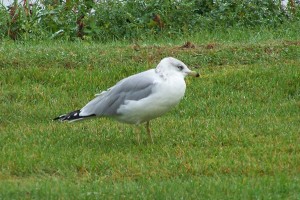 Why it’s called a ring-billed gull photo by Al Batt.

I was sitting on the sidewalk across the street from a commercial enterprise. I was watching a smokestack at dusk. Odd behavior even for an odd fellow like me. I was waiting for chimney swifts to go to roost. Appearing to be “flying cigars,” the swifts twittered overhead as they captured flying insects. Swifts fly constantly except when at the nest or roosting at night. The swift bathes in flight. It flutters to water, strikes the surface with its body, and shakes the water from its feathers in flight. The chimney swift’s nest is a half-saucer of small twigs held together with saliva and glued with saliva to the inside wall of a chimney.

As I kept an eagle eye out for swifts above the smokestack, a man walked near. He asked me what I was doing. I told him. He gave me a sympathetic smile and said, “Well, good luck with that,” before walking away, shaking his head.

I watched 150 chimney swifts zoom into that smokestack.

Wayne Sather, of Glenville, told me that he found a cat with three kittens in the haymow of his barn. Nothing unusual about that. What was strange was that there was a baby rabbit nestled with the kittens. Wayne said that the only way the bunny could have gotten into the haymow was if the mother cat had carried it there. Wayne wrote, “The mothering instinct must be the most powerful instinct in the world.”

He gave the window a good thrashing

A brown thrasher has one of the largest song repertoires of any North American bird. It is an aggressive defender of its nest and will attempt to drive people and dogs from the area.

A brown thrasher fought with my living room window one day. It wasn’t the ferocious onslaught of a robin or a cardinal. There was some pecking and many dirty looks given to the bird’s reflected image in the glass. The thrasher would hammer the window a couple of times and then fly a short distance to a lilac branch. Perched there, it turned its head to get a better look at its dreaded foe mirrored in the window. Finally, the thrasher flew away with a, “Fine, be that way. I gotta go.”

Tornadoes hit. I was on my way home from “up north.” The rain had ended. As I drove south of the tornado-damaged area, I saw a double rainbow. It would have been impossible not to see it. The second rainbow was nearly as vivid as the first. I don’t know that I have ever seen one any brighter. Secondary rainbows are caused by a double reflection of sunlight inside the raindrops. The colors of a secondary rainbow are inverted compared to the primary rainbow, with blue on the outside and red on the inside. The secondary rainbow is fainter than the primary because more light escapes from two reflections compared to one and because the rainbow is spread over a greater area. We remember the colors of a rainbow by recalling Roy G. Biv — red, orange, yellow, green, blue, indigo and violet. In Greek mythology, the rainbow was considered the path made by a messenger between Earth and Heaven. In Norse Mythology, a rainbow called the Bifröst Bridge connected the realms of Ásgard and Midgard, homes of the gods and humans. The Irish leprechaun’s hiding place for his pot of gold was at the end of a rainbow. According to Christian religion and Judaic religion, the rainbow was a sign of God’s promise that terrestrial life would never again be destroyed by flood.

“I saw some pelicans with knobs on their bills. Not all of them had the knobs. What are they?” Before leaving the warm waters of the south where they spend the winter, American white pelican adults develop a nuptial tubercle or horny knob on their bills. The fibrous bumps are believed to serve a twofold purpose. They signal members of the opposite sex that the birds are in the market for a mate, and they serve as a target for other adults during fights over territories. Battling pelicans of a breeding age aim their bills at these knobs and not other parts of the head that could cause great injury. Once eggs are laid, the knobs fall off. American white pelicans generally reach sexual maturity at three years of age, so the younger birds would not have the tubercles.

“It’s hard to detect good luck — it looks so much like something you’ve earned.” — Frank Howard Clark

“I’ve seen a look in dogs’ eyes, a quickly vanishing look of amazed contempt, and I am convinced that basically dogs think humans are nuts.” — John Steinbeck