“Everything is nearly copacetic. If things were twice as good, they wouldn’t be half-bad. I’m still on my exercise program. Each day I do one pushup, one sit-up and one lie-down. My sister Cruella asked me to go shopping for her. She told me that I should buy a gallon of milk and if they had eggs, get six. I did what she told me to, but when I gave her the six gallons of milk, she seemed confused.”

“I am, too. Why did you buy six gallons of milk?” I wonder aloud.

“Because they had eggs. I ran into our neighbor Gnarly at the Shopping For Dummies Supermarket. He had a tear in his eye. Marie’s father had threatened him that if he didn’t marry her, Gnarly would be put in jail for 50 years.”

“And he was crying because he was happy he had married Marie 50 years ago?” I ask.

“No, he’d just realized that he’d be out of jail now. Gnarly said that for their 40th anniversary, he took Marie to Paris.”

“How romantic. I didn’t suspect Gnarly had that side. What is he going to do for his 50th anniversary?” I say.

“He’s going back to Paris to get Marie.” 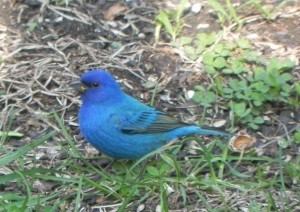 Photo of an indigo bunting by Al Batt.

A lady from Duluth told me that she purchased a home from a friend who had downsized to an apartment. The location was just what the new homebuyer was looking for — an ideal habitat for both humans and wild birds. One day, she spotted a hummingbird hovering in the middle of the yard. There were no flowers near the bird. Several times during the day, the lady spotted the tiny bird hovering in the same place. She called her friend, the former owner of the house, and mentioned the strange avian activity. Her friend told her that the bird was hovering at the spot where she placed a hummingbird feeder each year. The homeowner put a feeder at that site and the hummingbird fed to its content.

I watched a male indigo bunting fly down and land on the stem of a tall dandelion — with a dried seed head. The petite bird rode the puffball to the ground like a rodeo cowboy wrestling a steer. Once the bunting and the puffball were both on the ground, the bird began to eat the dandelion seeds.

Many warblers are yellow. The yellow warbler is the most extensively yellow. The male’s face, throat and underparts are a bright yellow. It is streaked with chestnut below the throat. Its upperparts are yellow-green to olive, the wings are edged in yellow and there are yellow tail spots. The female displays bright yellow underparts, greenish-yellow back and face, an indistinct yellow eye ring, narrow and indistinct chestnut streaks on breast, sides, and flanks and yellow tail spots.

The acoustic energy produced by a bird weighing less than half an ounce is astounding. I was born to hear the song of the yellow warbler. As a listener, we cannot help but be changed by what we hear. I love birding. It forces me to listen.

Orioles eat hairy caterpillars that most birds do not. They slap the caterpillars against a tree branch until most of the hairs fall off and then they eat them. The gray catbird is a scat singer. Its common call is a raspy cat-like mew. Its song, that it uses to proclaim territory, lasts up to 10 minutes. Both birds eat grape jelly.

Al Weisert, manager of Hy-Vee in Albert Lea, said that so many people fed grape jelly to the orioles this spring that the store had difficulty keeping grape jelly on the shelves. Tom Benson, of Hartland, ran out of grape jelly and unable to locate any, fed the birds grape Jell-O. Tom reported that they didn’t care for it. There is always room for Jell-O, unless you’re an oriole.

“Should I boil the water for the hummingbird nectar?” If you mix small quantities of sugar water every day or two, there’s no need to boil the water. If you mix a large amount and refrigerate for later use, it’s wise to make it with boiling water. Four parts water to one part sugar. Add no coloring.

“How long does it take a Baltimore oriole to build a nest?” The average time for the female to weave a nest is four to eight days. She builds a new nest each year, often in the same tree used in the past. If you put out string or yarn for nest building, make the pieces six to 10 inches long.

“Where are the goldfinches?” Goldfinches come and go from feeders according to the availability of wild food. Dandelions provide some of the first wild seeds for goldfinches. Nature is rampant with maturing seeds. Don’t worry, the nomadic birds will return to grace your feeders.

“You can find on the outside only what you possess on the inside.” — Adolfo Montiel Ballesteros

“We can judge the heart of a man by his treatment of animals.” — Immanuel Kant