Spun by a merry-go-round

During a recent conversation in the Tribune’s newsroom, the editor asked if there were any merry-go-rounds still around as part of the city’s park system, besides the one at Shoff Park. 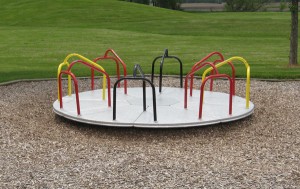 No one present during this session had an answer, except me. I said there might still be one of these circular devices for children to ride on in Ginkel Park. Right at this point I was confronted with the challenge of explaining just where in heck Ginkel Park is located.

One of the most obscure parcels in the city’s park system is located inside the block based on Edgewood and Cherry avenues and Johnson and Sheridan streets. And here’s when the answer gets tricky. There are homes on this long block facing those four streets and avenues. The park is actually in the center of this block.

When the Ginkel family set up this residential area in the early 1950s, they had a problem with the layout. There was a large space in the center of this block. This would result in extra large backyards for the new homes, or a nice plot of land that could be fenced off and donated to the city for a park.

Years ago this park had an ice skating pond, a sandbox, swings, a slide, an old style (wood and bare steel piping) merry-go-round, a large grassy space for baseball and football games and maybe a teeter-totter. As a parent, I can confirm that it was a great recreational asset for this neighborhood.

At the present time the grassy space for baseball, football and soccer games is still there. A sandbox, newer swings and slides and even a picnic table are in the north end of Ginkel Park. However, my comment about the merry-go-round was wrong. It’s no longer there.

Yet, there are still four newer style and more colorful merry-go-rounds in the city’s park system. They are in Shoff, East Gate, Wedgewood and Park Avenue parks. The photo of the one in Wedgewood Park is a part of this column. And as a bonus, an older type of merry-go-round is highlighted in one of the photos with the article about Morin Park in this Sunday’s Lifestyles section.

Maybe the number of merry-go-rounds, and even teeter-totters, have declined through the years. Yet, the people of Albert Lea can take pride in the newer playground choices in the local parks and at the elementary schools. The days of wood and bare steel for the recreational creations are over and in their place are the present plastic-coated items with several predominate colors.

According to a list I received from the city’s Park and Recreation Department, there are eight designated play parks. They are Academy, Hawthorne, Hayek, Lakeview, Oakwood, Sibley, Sondergaard, Troy-Hammer and Valley Parks. However, there are even more places within the city’s park system where there happens to be play equipment for the younger generation including Ginkel and Morin Park.

As a footnote, the Lakeview Park mentioned is to the north of Hatch Bridge in Shoreland Heights between Willamor and Martin roads. At Lakeview Elementary School, there’s a playground complex with a predominate blue color.

And let’s also give a special mention to the indoor play area for children at Albert Lea’s Burger King.

A Lea College graduate now living in Chicago called and said he received his diploma in 1969. He may have thought my articles on June 5 or May 29 implied the first Lea graduation took place in 1970. That’s wrong. The key word used in the Chronos yearbook and in the article was “charter.” The reference to the 1971 graduation being the second came from a Tribune news article.

This particular person had attended another college before coming to Lea. Thus, he only spent three years at Lea to obtain his diploma in 1969.