“Everything is nearly copacetic. I’m still bringing up the rear but someone has to. I spent all day yesterday with Ma. She has opinions without any bothersome facts. She’s like discount toilet paper. She doesn’t take any you know what off anybody. She can’t remember names. She blames other people for not wearing nametags. She made Pa wear a top hat and black tie when he married her. He said that was a bit chilly. Do you think your missus would mind if I put a plate under some of that pie? Much obliged. Your wife’s a good cook. I knew she would be when your wedding supper was potluck.”

“I’ll make sure to pass your compliments along to her,” I say.

“Clapsaddle was watching me weld the other day. I told him to be cautious but he didn’t give a rodent’s rear end. He picked up a clevis, not realizing that I had just welded it. He dropped it and jammed his hand into his pocket, trying to act as if nothing had happened. I asked him, ‘Kind of hot, wasn’t it?’”

“What did Clapsaddle say?” I ask.

“He clenched his teeth and said, ‘Nope, it just doesn’t take me long to look at a clevis.’” 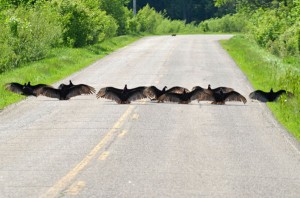 Photo of a turkey vulture roadblock by Darcy Sime of Alden.

Turkey vultures fly with their wings in a dihedral (shallow V-shape) and have a characteristic rocking motion in flight. They are graceful. I think they are beautiful. When they do flap their wings, it appears laborious. The turkey vulture is skillful at soaring and moves with minimal energy output. Turkey vultures circle on pockets of rising warm air (thermals) in order to gain altitude. Reaching the top of a thermal, vultures glide across the sky at speeds up to 60 miles per hour while gradually losing altitude. To regain altitude, they find another thermal and embark on another sequence of circling, rising and gliding.

I was leading a bird walk. I came to a hole in the prairie where a badger had been digging in search of a gopher. A person in my group asked me what it was. I told her that it was an ant hole. She said that she had heard of an anthill, but never of an ant hole. I asked her where she thought the ants got the dirt for their anthills.

Then I told her that it was a hole made by a hungry badger.

It was early in the day when I saw them. They were a pair of tree swallows and a large, white feather. The swallows were flying high overhead. One carried the feather in its bill. It released the feather and the other swallow zoomed in and grabbed the feather in midair. I watched as the pair repeated this activity in the sky. Playing with nest materials is likely a part of the pair bonding process. It was a beautiful thing to see and it made me smile. Later in the day, I walked under a utility wire running above a nest box favored by tree swallows. I looked up to see a swallow perched on the wire. It appeared unconcerned with my proximity. I walked to the mailbox and on my stroll back to the house, I noticed that the swallow, still perched in the same location, became excited and vocal. I looked up to see its partner flying into the yard. It had a large, white feather in its mouth.

Fireflies appear in forest clearings, meadows, road ditches and prairies. The larvae live in moist habitats such as leaf litter, wetlands and riparian areas. Males and females find one another by exchanging light flashes and emitting chemicals called pheromones. Males flash lights while flying. The females, positioned on low plants, flash a return signal. Each species has a pattern of light flashes. Fireflies produce cold light in modified body tissue. Firefly larvae and wingless females of some species that produce light are called glowworms. Larvae feed on other insects, earthworms, slugs and snails.

“I saw a small whirlwind crossing a field. What caused it?” I call them dust devils. A dust devil is a whirlwind of air into which dust and debris are caught up, making it visible. Most dust devils are 10 to 50 feet in diameter and usually don’t extend more than 100 feet into the air. They are generally seen during relatively dry conditions, when sunlight provides strong heating of the surface and winds are light. Dust devils form when hot air near the surface rises quickly through a small pocket of cooler, low-pressure air above it. If conditions are right, the air rotates.

“What do screech owls eat?” They eat large insects like moths, grasshoppers and small rodents like mice. They eat songbirds, including starlings. Despite this fact, the starling regularly displaces the owl from nesting sites.

Bug zappers are not effective in controlling mosquitoes. They kill beneficial insects and do not attract mosquitoes.

A single dandelion plant can produce 15,000 seeds in one year, and each seed is capable of surviving up to six years in the soil.

The leaves of the silver maple have long petioles that allow the leaves to turn in the wind and show silvery undersides.

“Ah, summer, what power you have to make us suffer and like it.” — Russell Baker