When tractors were made in Albert Lea 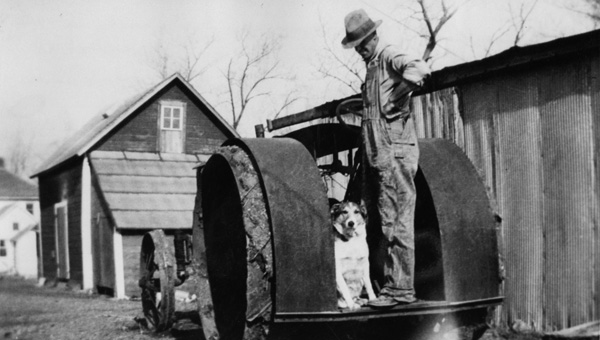 This is one of only two known photos even taken of a farm tractor made in Albert Lea. The owner of his unit possibly made by the Strite Tractor Co. was Robert E. Jensen who had a farm between Albert Lea and Manchester in the 1930s. -- Photo courtesy Freeborn County Historical Museum

Having the Red Power Roundup at the fairgrounds could serve as a reminder that Albert Lea once had a nearly forgotten part in the history of American tractor manufacturing.

One of the least known aspects of Albert Lea’s history is based on the verified fact that three different firms actually assembled farm tractors on the city’s east side just over 90 years ago.

The first of the three firms that could have made Albert Lea the “Detroit of farm tractors” actually started operations in Minneapolis. This was the Strite Tractor Co. According to the “Encyclopedia of American Farm Tractors” reference book, this firm was organized in 1913 by George T. Strite, E. L. Strite, F. H. and H. J. Bierman, and J.S. Clapper. 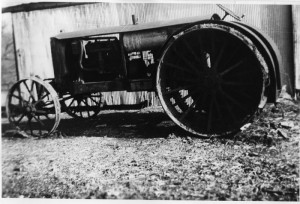 This is the second of two known photos of a tractor made in Albert Lea. The two photos are part of the collection owned by Eddie Johnson, local tractor and farm equipment enthusiast. A detail worth noting is the lack of a seat for the operator who had to steer the tractor standing up. -- Photo courtesy Freeborn County Historical Museum

Their “3-Point” tractors in the three-wheel and “B” and “C” (four-wheel) models were initially assembled by the Imperial Machinery Co. The Imperial firm, incidentally, was one of several pioneer farm tractor makers in Minneapolis, had its own product line, and was active until about 1920.

There could have been a basic conflict of interests between the Strite and Imperial firms by 1915. Anyway, that’s the year a delegation from the Strite firm came to Albert Lea with a proposal to relocate their farm tractor assembly operations to Freeborn County.

A news article said the local Business Men’s League (a predecessor to the present Chamber of Commerce) was involved in the negotiations to move the Strite operations from Minneapolis to Albert Lea. A local delegation went north to work with the Strite officials. Locally, a committee of six civic leaders met with the firm’s officers and major stockholders to arrange for a new plant site near the packing house on the city’s east side. Also, several local citizens became stockholders in the Strite Tractor Co.

One of the men who came to Albert Lea was George L. Sexton, described as Strife’s “sales promoter.” He was to have a major role by 1917 with the developments regarding farm tractor manufacturing in Albert Lea.

The offices for the Strite Tractor Co. were located in Room 235 of the then new six-floor Home Investment Building. (This structure is now designated as the Lea Center.)

A factory building for the assembly of farm tractors was constructed in 1916 and located north of the Rock Island Railroad tracks and the Albert Lea Packing Co. plant (soon to become a part of Wilson & Co.). This building was 75 feet by 100 feet in size. Within a short time another nearby structure was built to be used as a foundry.

Assembly was the best term to use to describe the creation of new Strite farm tractors on Albert Lea’s east side. Major components from manufacturers elsewhere in the nation were shipped to the city by rail. These components were then combined with specialized iron castings from the nearby foundry and some parts from the firm’s metal and blacksmith shops to create a new tractor.

This ad is from the 1917 Tri-State Telephone Co. directory and shows one version of a farm tractor that was once made in Albert Lea. -- Graphic courtesy Freeborn County Historical Museum

This same system of combining components from various suppliers is certainly still in use at the nation’s auto, truck and farm equipment plants today.

In fact, the Strite firm emphasized that it was producing “the first standardized tractor.” A Tribune ad in early 1917 declared, “The Strite Model ‘C’ Light Farm Tractor is more profitable to the farmer than horses and some other types of tractors because it has (been) proven … in 25 states.” (This statement obviously included tractors made in Minneapolis before the move to Albert Lea.)

By 1917 the Strite name had been replaced on the tractors with the Sexton label, and the Albert Lea plant was renamed the Sexton Tractor Co.

The first Sexton tractor was given a “grueling test” when it was used to help plow a 30-acre field owned by Henry Dwyer. A news article said the Dwyer farm was located “one mile from the Hammer schoolhouse and northeast of the city.”

Four more Sexton Tractors were assembled by mid-1917, loaded into two railroad freight cars, and shipped to Fremont, Neb. Another news article reported that the new tractors from Albert Lea would be participating in a national tractor demonstration with 108 units from other firms.

This news article said, “The four machines in question are all sold to Nebraska distributors, but will be retained by the local company until’ after the demonstration. Yet, by the time of the Freeborn County Fair which took place Aug. 21-24, 1917, a large newspaper ad confirmed that the Sexton implements were being assembled by the Albert Lea Tractor and Mfg. Co. This ad said the Sexton Tractor was “Made in Albert Lea” and was “The Real One-man Tractor; Sturdy as the Oak.” The ad also reported that this model had won honors at the “great National Tractor Demonstration held Aug. 13 to 17 at Fremont, Neb.”

Sometime in late 1917 or maybe early 1918 the Sexton name on the locally-made farm tractors was changed over to the Albert Lea brand. And within a year or two the short era of tractor assembly ended in Albert Lea.

Just what caused the final demise of the Strite, Sexton and Albert Lea tractor makers is now unknown. However, it can be speculated that financial, competitive and maybe mechanical problems ended this short phase of local history. Also, this was the era of many automobile and farm tractor manufacturers which all started off like flashy rockets and quickly faded out.

Copies of old literature and ads for two of these firms, Strite and Albert Lea, in the files of the Freeborn County Museum Library show obvious similarities between their tractors. For example, the only difference shown between the Strite Model “C” and the Albert Lea Model “C” units is the name painted on the tractor’s hood. Also, both firms list the same 20 qualities for their tractors.

The main building used by the local tractor makers eventually became the Albert Lea Foundry and was a part of Queen Stove Works and its corporate successors. This site on East Main Street by the viaduct was demolished in 1986.

Are any of the farm tractors once assembled in Albert Lea still in existence? The likely answer is no.

Local historian, the late Bidney Bergie, and antique tractor collectors and enthusiasts, Nordean Krueger and Eddie Johnson, say they aren’t aware of any of these old locally-made tractors being on exhibit or even privately owned in this part of the nation.