Albert Lea and Freeborn County have significant historical connections with other localities in both Europe and North America. One of the most interesting is with the small city of Gig Harbor out in the state of Washington. To help emphasize this point, this and three future columns will be based on this association. And the first significant person to be involved with this association is Dr. Alfred Marcus Burnham. 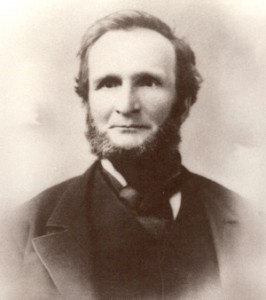 He was born during 1824 in Genesee County, N.Y. By 1853 Burnham had attended high school, several academies, studied medicine with two doctors and graduated from the University of Buffalo as a medical doctor. Three years later he moved to Wisconsin and within a year moved again to Waseca County. After a short time he became one of the first residents of the new village of Itasca.

Burnham was a doctor, a business promoter and a real town booster. He built a large home in Itasca and really worked to promote this growing village as the future Freeborn County seat. However, by 1860 Albert Lea firmly became the county seat and Itasca started to fade away. The doctor also became involved with a hotel venture in Shell Rock (now Glenviile). In 1865 his first wife, Jerusha, died and is now buried in the Itasca Cemetery northwest of the city.

Burnham moved to Wyoming for a short time in the late 1860s, then came back to Albert Lea to again become a doctor, county health commissioner and a land developer.

In early 1884 the doctor and his family moved to Denver, Colo., and within a few months moved further west to what was then New Tacoma in Washington Territory.

Within a few months he and his second wife, Rachel, and family had moved by boat about 11 miles west to a place named Gig Harbor.

This place on Washington’s Olympic Peninsula was named by Capt. Charles Wilkes, who was in a small boat called a gig. He was doing some exploring in 1840 when a severe storm forced him and several crew members from his ship who were in the gig has to find shelter in a small bay. There, that helps to hopefully explain how this place was named.

By 1867 several fishermen and their families started to live next to this bay. In late 1884 the Burnham family went from Tacoma by boat to this locality on Puget Sound. The doctor acquired title to 160 acres of land next to the bay. In 1888 he divided (platted) this property into lots and offered a free building site to anyone who would construct a home and paint it white. This is considered to the start of the town of Gig Harbor. And Dr. Burnham gets full credit for being this community’s founder.

He became the first doctor in Gig Harbor. Mrs. Burnham became the postmaster for the nearby town of Rosedale, Their son, Clarence, operated the community’s first general store. Their oldest son, Bismark, became a steamboat operator on a route based on Gig Harbor and Tacoma to transport freight, mail and passengers.

As I will explain in more detail in a future column, there was no easy land route for the 11 miles from Tacoma to Gig Harbor. The real obstacle was Puget Sound and a watery place called the Tacoma Narrows.

Today, his legacy can be found in local history references, plus on the official Washington state map and the Rand McNally Atlas. The detailed map for the Seattle and Tacoma area shows a major street for Gig Harbor clearly designated as Burnham Drive.

Full credit for inspiring this and at least three future columns goes to museum volunteer Anita Lotts. Her excellent research helps to verify the connection between Albert Lea and Gig Harbor.

Maybe the city should put up signs on East Front Street east of the channel with the words “Goose Crossing.”

With just three exceptions. Ed Shannon’s column has been appearing in the Tribune every Friday since December 1984.