Lawrence Klukow says there’s most of the skeleton of an ancient buffalo or plains bison still in the ground near a fish pond south of Conger. 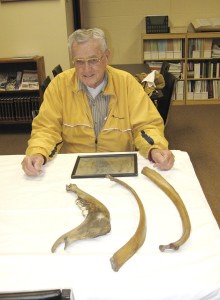 Lawrence Klukow, who now lives in Walnut Shade, Mo., shows the drawing from the University of Minnesota, plus the jawbone and two ribs from an ancient buffalo or bison he found while digging a fish pond south of Conger about 40 years ago. -- Ed Shannon/Albert Lea Tribune

Klukow is absolutely sure of this fact because he found four of the creature’s preserved bones while working to create this fish pond in the early 1970s.

He was using a drag line to dig out a fish pond on the farm of the late Eldo Behr. During the digging process, a strange object came out of the ground from what he said was an estimated depth of four feet. This object was the skull of a very large animal.

“I worked with Russ Harding to find out what it was,” he said.

Harding was at that time a science teacher at Brookside Junior High School. The skull was later sent to the University of Minnesota for further identification.

The university reported that the skull was at least 8,000 years old. A drawing, plus a report identifying the animal as an ancient buffalo or bison was sent to Klukow.

He still has the framed drawing that shows the creature with the horns pointed straight out instead of the upward curve on the present bison or buffalo. However, Klukow states he can’t find the written report.

He added that the intention was for the university to return the skull to the Freeborn County Historical Museum. This never happened. Yet, there are several bison or buffalo skulls found elsewhere in the county which are now part of a museum exhibit.

Klukow speculates that Indians drove the ancient buffalo into what was then a deep peat bog. The creature became trapped, sank down into the mire and eventually died.

A short time after finding the skull, Klukow found a jaw bone and two rib bones abut 16 inches long each. He still has these items in his personal collection.

“Those bones have gone to school show and tells with my kids and grandkids,” he commented.

“I’ve been in construction all my life,” Klukow said.

During World War II he served in a U.S. Navy Construction Battalion (the Seabees). He takes pride in being the developer of Wildwood Country Estates southwest of Albert Lea.

About 11 years ago he moved to the Branson, Mo., area and now lives in the nearby community of Walnut Shade, Mo.

“I know the rest of the bones are still there,” he declared during a recent visit to the Freeborn County Historical Museum. “Now I’m wondering if it (the ancient buffalo skeleton) can be put back together again.”

Drawing above courtesy of Lawrence Klukow.