Many sights to see during a bird survey

“Everything is nearly copacetic. The neighbor boys, Pete and RePete, have been helping me build a new grain bin. Today, Pete didn’t show up. You can’t count on whippersnappers.”

“Oh, he had a lame excuse. He and RePete were using a pulley system to hoist a barrel crammed with power tools. The barrel was almost to the top of the bin when RePete sneezed and needing to use his sleeve as a slissue, RePete let go of the rope. Pete hung onto it. They’re not big boys. When RePete let go, the barrel and its contents outweighed Pete. Up Pete went until he met the barrel coming down. Battered, Pete continued upward until he jammed his fingers into the pulley. The barrel hit the ground with such force that it knocked the bottom out. Now Pete weighed more than the barrel. Pete headed back down and hit the barrel on its way up. A bloodied Pete hit the ground, landing right on top of the power tools. I don’t know what Pete was thinking, but he let go of the rope and the barrel landed on him. That’s why Pete thinks he needs a day off.” 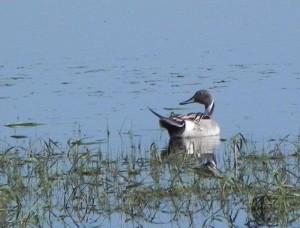 That’s how the Breeding Bird Survey, otherwise known as “Let’s see how much skunk smell I can inhale while slapping mosquitoes” began.

I do a BBS each June. At 5:02 a.m., I began looking for birds. On my drive to the starting point, I looked for deer that I could avoid hitting with my car. Deer like to share the road with me. I encountered assorted wildlife including skunks and mosquitoes. I might have swatted a male skeeter or two. It used to bother me killing innocent male mosquitoes — flower sniffers — until my wife, The Queen B, assured me that there is no such thing as an innocent male of any species. Either a grackle or a robin is typically the first bird I count. I prefer the robin. In the ancient art of augury, seeing a robin meant good luck. My first bird this year was an eastern meadowlark that I identified by its clear, melodious whistle. Cool bird.

I came onto a road that, as the sign said, was closed to all but local traffic. By the looks of that road, all of the local traffic was trapped in a bottomless pothole. I heard roosters crowing near an “Eggs for sale” sign at the end of a farm driveway. I took a short stroll through Red Oak Cemetery and enjoyed seeing young robins with speckled breasts just coming into their bob-bob-bobbing along days. There was a good starling crop again this year. Lovely oxeye daisies kept me company and a barn swallow flew in through the opened window of my parked car. It was likely investigating possible nesting sites.

I made 50 stops for three minutes each. I saw a snapping turtle crushed on the road, killed while laying eggs. I spotted Canada geese families — one with 12 goslings and another with eight. I watched monarch butterflies flutter by. I observed three red-winged blackbirds hammering an unwanted visitor, a red-tailed hawk flying over a wetland. It was as if The Three Stooges were taking on Mike Tyson with The Three Stooges winning. The victorious blackbirds returned to their singing posts to cry, “Look at me.”

A vole (meadow mouse or field mouse) scurried across the road. It is food for many predators. There is no accounting for taste. Chorus frogs (sound like a thumbnail running down the teeth of a comb) and trilling American toads serenaded me. I prized my looks at Canada anemone, wild rose, campion, goatsbeard (looking like a large dandelion), bird’s-foot trefoil and red clover that I called red top hay when I baled it. Robins sang “cheer up, cheerily, cheer up” and a goldfinch called “potato chip” as two wild turkeys with eight young walked nearby. The young turkeys are not goblets. They are poults.

As Yogi Berra didn’t say about a BBS, “You can observe a lot by looking.” The BBS was a birding bonanza with the entire world chirping.

Teddy Roosevelt wrote that trying to describe the Grand Canyon bankrupted the English language. The same could be said for trying to summarize a BBS or to express what I have seen in my backyard or on a walk.

“Could there be poison oak growing in my woods?” Poison oak doesn’t grow as far north as Minnesota. Poison ivy leaves are variable. Some are lobed and could be mistaken for poison oak leaves that resemble those of an oak. Poison oak may be distinguished by the undersides of its leaves. They’re lighter in color than the tops and covered with fine, velvety hairs. Poison sumac is found in Minnesota in swamps, bogs and wet ditches. The sumac that covers hillsides and turns crimson each fall is not poison sumac. Poison ivy is common here. Its leaflets are arranged in groups of three. Leaves of three, let it be. Poison ivy leaves may be smooth or dull surfaced. They’re somewhat oval-shaped, though the edges can be coarsely toothed or lobed. Poison ivy is equally at home in sun or shade. Never burn poison ivy; you can suffer skin or lung injury from the resulting smoke. My mother experienced this while burning road ditches.

“What fly bites my ankles?” It is likely a stable fly. Resembling a housefly, it has a bayonet-like proboscis that it uses to feed on the blood of mammals such as humans, dogs, cattle and horses.

Folklore says the blue jay was yoked to a plow by a sparrow. The mark left by the yoke can still be seen on the blue jay’s breast.

“Snowflakes are one of nature’s most fragile things, but look what they can do when they stick together.” — Unknown