Picnic Time in the Olden Days

Summertime is the popular time for picnics. This basic fact has been a tasty and very social part of life all through the years.

During those years these picnic events have been inspired by several factors. One is a family gathering. Another has to be family reunions and visits by relatives and friends from other localities. Then there were always the picnics sponsored by neighborhood groups, clubs and church groups.

One of the Albert Lea parks where picnics have been held through the years is Pioneer Park at the west end of Hawthorne Street. The picnic tables and a play area for children in a park next to Fountain Lake help to emphasize this fact. The sign shown in this photo is an older version and has been replaced with the present one at this park. -- Photo courtesy Freeborn County Historical Museum

Finding places for the picnic events seems to have never been a challenge. For some folks a backyard or grassy place in the shade provided by a grove of trees became a prime place for outdoor dining.

For Albert Lea residents several generations ago, the most popular places for picnics were evidently based on Pioneer and Frank Hall Parks. In later years, the choices were extended to newer city parks, several county parks and a state park (Helmer Myre, now Myre-Big Island) for picnic gatherings. Then there were places like country schools, churches and parks in other localities that could be used for picnics.

It’s safe to comment that nearly all the food items for those picnics years ago were prepared in home kitchens. Some beverages, like lemonade, may have been homemade; other liquid refreshments were purchased.

Getting to the picnics once involved plenty of walking and the use of horse-drawn buggies, carriages and wagons and even bicycles. For events in other communities that might include picnics, travel for some participants could be based on passenger trains.

A factor for picnics of a earlier era involved travel on mostly rough unpaved roadways that were either dusty or muddy, depending on the weather.

With the advent of horseless carriages or auto buggies, people had a quicker way to travel to the picnics. And in time the roadways became paved and the participants had even more time to enjoy the social and tasty aspects of summertime picnics. 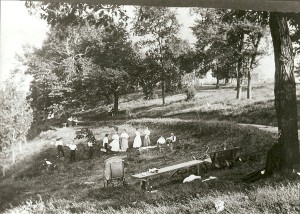 The Otto Sorenson family held a picnic at Frank Hall Park about a century ago. Details worth noting are the baby carriage in the foreground and what appears to be a bicycle leaning on the table. This family’s picnic could have been held around the table or several blankets laid out on the grass. -- Photo courtesy Freeborn County Historical Museum

This group of local automobile owners was involved in what they called a “working bee” and picnic about a century ago. Their event was based on driving to a part of the area where the roadway was in poor condition. They would park their vehicles, repair the roadway by filling in a pothole or removing a hump, then having a picnic. -- Photo courtesy Freeborn County Historical Museum