“Everything is nearly copacetic. It’s all going so well, I must have overlooked something. I put a new bumper sticker on my car. It reads, ‘If you can read this, you should have left earlier.’ I’ve been thinking. I like to do that occasionally just to shock my old teachers. What I was thinking was that even under ideal conditions, I have trouble locating my car keys, finding my cell phone or pinning the tail on the donkey. But I’m able to find and push the snooze button on my alarm clock in less than a second with my eyes closed. I do that the first time, every time. It’s my exercise program. My broker, Opportunity Knox called me yesterday. He brightens my day like a total eclipse of the sun. If there was a state liar’s contest, Opportunity would come in first, second and third. Saving money is like herding cats. Opportunity told me that my retirement plan is going the way we had planned except for one minor thing.”

“I asked Opportunity the same thing. He said, ‘Everything is the same except instead of retiring at 65 like you had planned, your new retirement age is 105.’”

I walked a gauntlet of spider webs as I listened to the robins tut-tutting from a mulberry tree. Tree swallows, nesting in my yard, clicked their bills at me as they flew by. I could almost hear Cat Sevens singing, “I’m being followed by a tree swallow.” The red on the head of a red-headed woodpecker caught the sun. As I watched the handsome woodpecker feed on sunflower seeds, the rest of the world seemed out of focus. 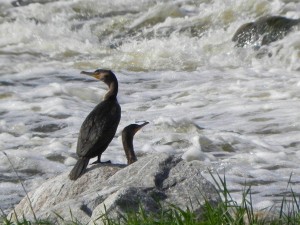 Photo of a double-crested cormorant by Al Batt.

I was “up north.” An exaggerated crow soared overhead — a raven. It was a stretch limo version of a crow.

It gave me call to think of the words of Bernd Heinrich, professor emeritus at the University of Vermont and author, who wrote, “…the raven is big, black, and beautiful. Its highly glossed plumage shows iridescent greens, blues, and purples, shining like a black dewdrop in the light. And it dives and rolls like a black thunderbolt out of the sky or speeds along with liquid, gliding strokes. The raven is the paragon of the air, and more. It is assumed to be the brains of the bird world, so its deep, sonorous, penetrating voice demands immediate attention and respect, even though we have little or no idea what it says. It has a greater variety of calls than perhaps any other animal in the world except human beings. It is an imposing bird.”

An entomologist allowed insects to sting him and then rated the pain levels. The Schmidt Pain Index ratings follow.

1.0 Sweat bee: A tiny spark has singed a single hair on your arm.

1.2 Fire ant: Sharp and mildly alarming. Like walking across a shag carpet and reaching for the light switch.

1.8 Bullhorn acacia ant: Someone has fired a staple into your cheek.

2.0 Bald-faced hornet: Similar to getting your hand mashed in a revolving door.

2.0 Yellowjacket: Imagine WC Fields extinguishing a cigar on your tongue.

3.0 Red harvester ant: Somebody is using a drill to excavate your ingrown toenail.

3.0 Paper wasp: Like spilling a beaker of hydrochloric acid on a paper cut.

4.0 Pepsis wasp: Shockingly electric. A running hair drier has been dropped into your bubble bath.

4.0+ Bullet ant: Intense pain. Like walking over flaming charcoal with a 3-inch nail in your heel.

“How can I tell a female turkey vulture from a male?” Turkey vultures are not sexually dimorphic. The sexes are identical in appearance. A collective noun used to describe vultures is a “venue.”

“Do you own a bug zapper?” No. They aren’t effective in attracting mosquitoes, let alone killing them. They kill many beneficial insects. I wave the mosquitoes away with my hand. I believe in sensible shoos.

“What are the dark patches under a kestrel’s eyes for?” Scientists speculate that they serve the same purpose as the black smudges athletes put on their faces before playing outdoors — the black pigment absorbs bright sunlight so it does not reflect back into the eyes.

“Why do woodpeckers peck on my house?” Woodpeckers hammer on houses for three reasons. To proclaim territory, to excavate a nest or roost hole, or to feed on insects living in the siding. The Cornell Lab of Ornithology tested six common deterrents. The methods tested were life-sized plastic owls, reflective streamers, plastic eyes on fishing line, roost boxes, suet feeders and a sound system that broadcasted woodpecker distress calls and hawk calls. Only the streamers worked with any consistency.

“Where do kingfishers nest?” A belted kingfisher has a large blue-gray body contrasting with a white collar and belly. A wide blue-gray band crosses the male’s chest. Females have a second chestnut-colored band. Kingfishers nest in holes, generally excavating tunnels in vertical sandy banks of streams, lakes, or gravel pits. They dig with their bills and kick the dirt out with their feet. The tunnel to the nest chamber is usually 3 to 6 feet long, though it may be as long as 15 feet. The excavation takes two to three weeks. Young kingfishers remain in the nest until they are about a month old. A parent uses an interesting technique to teach offspring how to fish. It catches a fish, beats it senseless on a branch and drops it back into the water. This enables young kingfishers to practice fishing for prey unable to escape.

“Each species is a masterpiece, a creation assembled with extreme care and genius.” — E.O. Wilson