Sound of cicadas is the sound of summer

“Everything is nearly copacetic. It’s all starting to click for me. Especially my knees. I’m becoming ambitious in my old age. I used to dream of running a marathon. Now I dream of running 10 marathons. I won three letters when I was in high school.”

“It’s true that money avoids me like the Vince Lombardi Trophy avoids the Vikings. Speaking of money, the banker Owen Money called me yesterday and told me that I was overdrawn by $2,000. I knew that couldn’t be right. I had nearly twice as much as I didn’t have last year. I ran into the bank. Owen told me that I was only $200 overdrawn.”

“He wanted to have some good news for me when I came in. Success hasn’t gone to his head, it went to his mouth. I can come up with $200. I don’t mind going to work. It’s that 8-hour wait to go home that gets me. I’m not afraid of hard work. There is usually a way out of it.”

“What are you doing today?” I ask.

“That’s what you did yesterday,” I say.

I hadn’t taken many steps before I heard a cicada’s call. There are no ice cream trucks with their tinkly music in my neighborhood. The raspy sound of a cicada is the sound of summer to me. 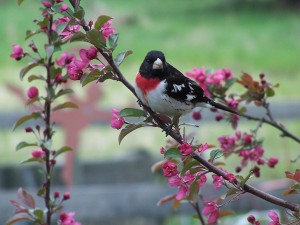 Photo of a rose-breasted grosbeak by Al Batt.

Accompanied by a ripple of birdsong a redbird flew past. It would have been a cardinal even if I had not seen it. As I looked in its direction, I spotted a brown thrasher rolling an old, dried walnut down the walk. The bird was likely looking for an insect, but it looked like it was playing — as if it were a tot with a ball too big for it to pick up. Thrashers enjoy eating beetles. Perhaps a beetle had sought refuge in a walnut shell. Birds make us see what we would not see otherwise. It was a great way to begin my day. Thoreau wrote, “An early-morning walk is a blessing for the whole day.”

I saw vultures. They were picking at a limp thing on the roadside, something dead provided by an automobile.

I felt a rock in my shoe. I paused to remove the offending stone. I took off the shoe, turned it over and the rock fell to the ground. I righted my shoe and a bright blue insect that resembled a leafhopper jumped into it. There is no hotline to call about such things. The color of the insect was striking. If I were the kind to get a tattoo, the beautiful creature would be the kind of tattoo I would get.

I released the blue bug and moved on quickly. I had style, I had grace. I had mosquitoes plastered to my face.

Marta and Duane Pettis of Hartland found an injured rose-breasted grosbeak. The kind couple took the handsome male bird to the Wildlife Rehabilitation Center in Roseville, a place that helps without judging. The grosbeak mended at the WRC, which can be reached by phone at 651-486-9453. I retrieved the bird from the WRC and released it at the Pettis residence. It was home. It flew into a large tree and made persistent contact calls. I hope one was answered.

“Why do my spruces have brown needles?” Many factors play into browning of spruce needles. This needle drop could be due to disease or insect problems. Rhizosphaera needle cast is a fungal problem particularly of Colorado blue spruce. Spruces shed older needles as growth continues. It is normal for older needles, those on the inside of trees that are three to five years old to turn yellow, then brown and eventually fall from the tree. Other causes of needle browning are herbicide, drought, animal, salt injury and nutrient deficiencies. Needles brown from the tips downward if the tree has had direct salt spray from roads. Water loss during winter can cause winter burn. High pH balance in soils can cause iron chlorosis because iron is not available to plants at high levels of alkalinity. This leads to needle discoloration.

“Do earwigs pinch people?” An earwig has a flat, reddish brown body. It has a pair of pincers on the tip of its abdomen that it uses for defense. The myth behind its name is that it was thought that the insect crawled into the ears of sleeping humans to feast on brains. Not true. They don’t bite people. Some people say they pinch, but I have never experienced that while handling them. It they do pinch, it’s not much of a squeeze. They feed primarily on decaying vegetation but may take a bite of your broccoli, beans, strawberries or zinnias. The damage could be confused with slug feeding.

Slugs leave a slime trail and earwigs do not.

An old issue of “Current Biology” that included a study, “A symmetric tail-wagging responses by dogs to different emotive stimuli,” by the University of Trieste and the University of Bari, both in Italy. The study found that the muscles on the right side of a human’s face tend to reflect happiness (left brain), whereas muscles on the left side of the face reflect unhappiness (right brain). A chicken prefers to use its left eye to search for food and its right eye to watch for predators overhead. When dogs are attracted to something, their tails wag to the right and when they are fearful, the tails went to the left.

The barn owl has the most acute hearing of any animal tested.

Ian Fleming’s fictional spy, James Bond, was named after a leading American ornithologist. Fleming, a keen birder, wanted a name that sounded as ordinary as possible.

“Nature does not hurry, yet everything is accomplished.” — Lao Tzu

“The game of life is not so much in holding a good hand as playing a poor hand well.” — H. T. Leslie