Summer is an indicator that winter has ended

“Everything is nearly copacetic. I doubt, therefore I might be. I got my old station wagon running. It’s from the day when cars had so much steel in them that parts of them were made to look like wood for those of us who wanted to drive a log. The car is so old it has upper and lower plates. My neighbor Still Bill is a work-shy lump, but he has lost a few pounds and he’s talked me into going on the same diet that he is on. I’m not good with diets. My problem is that I think too much.”

“Try not to give that a second thought,” I interject.

“Well, I worry. I lost a pound yesterday. If I maintain that rate, I’ll disappear in eight months. Some are men of many hats. I’m a man of many shirts. None of them clean. I use the bowling shirt with my name on it for identification. I like to wear just enough to stay warm in the winter and not be arrested in the summer, but I bought a new suit. It’s half cotton, half wool, and half linen.” 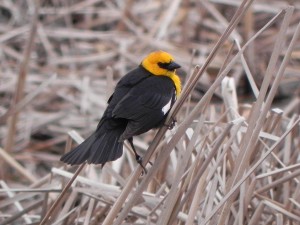 Photo of a yellow-headed blackbird by Al Batt.

Summer is an indicator that winter has ended; a hot and humid simmer that tells us that it is the heat and the humidity.

A few introductory notes began just outside my bedroom window. Then the musician burst into full song by 4:30 a.m. The gray catbird sings a jazz riff for most of the day. Its song is long like an avian version of “In-A-Gadda-Da-Vida.” The male catbird sings to proclaim territory. Catbird song is a prolonged, halting series of short whistles, squeaks, gurgles, whines and raspy cat-like mews. It imitates other birds, frogs and mechanical sounds.

I moved outside on a morning of mist and mellow thoughts. I walked toward a persistent cloud of gnats dancing in the air. I stumbled into a group therapy session for mosquitoes. Attack insects. Some people speculate that one day, insects will inherit the world. These mosquitoes wanted it now. Mosquitoes remind me of my place in the food chain.

I listened to the songs of birds. One bird stepping all over the songs of others. I saw a scarlet head moving in front of black and white wings. It would have drawn the attention even of those who have no interest in birds. I hoped the red-headed woodpecker had found a home in a snag.

I heard “Cow, cow, cow, cow, cow, cow,” the sounds becoming slower at the end. It was the song of the yellow-billed cuckoo, a bird more likely to be heard than seen. The approximate size of a mourning dove, the cuckoo has a long tail. It is called the “rain crow” because of a belief that frequent cuckoo calls foretell rain.

I hadn’t done it for years. I made a tight circle with my thumb and forefinger. I placed a large, flat leaf on top of that circle. I slapped down with the palm of my other hand. The leaf popped. I was just as chuckled as when I did the same thing when I was 8 years old. It was a superb way to celebrate summer’s arrival.

Her bakery was for the birds

The woman from Missouri told me that she made muffins and cornbread that are laced with peanut butter and various kinds of birdseed. She cooked the goodies in her kitchen and then fed them to the birds. The cartoon bubble over my head formed a bumper sticker on her car that read, “I bake for birds.”

“Where do ticks wait to feed?” Ticks are arachnids like scorpions, spiders, chiggers and mites. Ticks wait on the tips of grasses and shrubs. When brushed by an animal or human, a tick lets go of the plant and climbs onto the host. Ticks do not fly or jump, they only crawl. Ticks do not scale trees and drop down on humans and animals.

“When is the best time to go birding?” Bird anytime, any season, anywhere. Start at home. Birds are in most places that you are.

“Why are there no birds at my feeders?” Habitat changes frequently affect bird numbers. If there has been change in your neighborhood — trees cut down, new houses built, wetlands drained, etc. — that could be the reason you are seeing fewer birds. Natural food supplies fluctuate, causing birds to shift ranges according to food surpluses or shortages. They might desert feeders for those natural foods. The vagaries of the weather cause birds to move. A cat or hawk may be scaring birds away. Diets change, with some birds depending upon insects more when they have nestlings, so they are less likely to visit feeders. I hope and trust that the birds will return to your feeders.

“Are all birds protected by law even if they are not an endangered species?” Yes. The Migratory Bird Treaty Act of 1918 protects all native birds in the U.S. Even though some birds are subject to hunting seasons, only non-native birds such as starlings, rock pigeons and house sparrows receive no protection.

“Can birds choke on peanut butter?” There is no documented evidence of that ever happening.

Young screech owls climb out of the nest hole before they can fly. In this stage, known as “branching,” they perch on branches and move from branch to branch. The parents continue to feed them.

A police officer in Everett, Wash., used his car’s siren to try to scare away some crows. The birds responded by adorning the squad car with their droppings.

Black oil sunflower seed is the most popular birdseed. It is enjoyed by the greatest variety of birds that we want at our feeders.

“I would like to paint the way a bird sings.” — Claude Monet

“A little nonsense now and then, is cherished by the wisest men.”— Willy Wonka