Two reminders for the big island 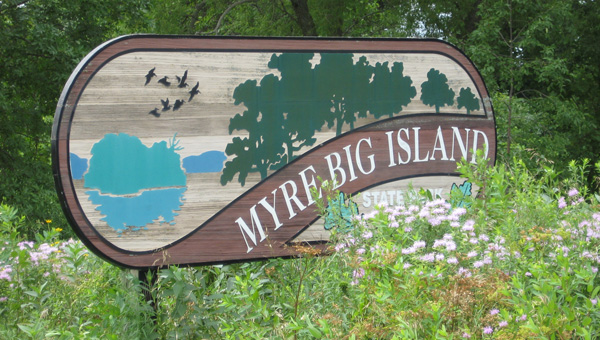 During its 64 years of existence, the state park based on Albert Lea Lake southwest of the city has had three names. And one of those names is now emphasized on a bronze plaque in this park, plus a grave marker in St. Theodore’s Cemetery. 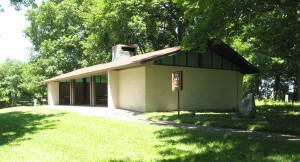 The present picnic shelter in Myre-Big Island State Park was built in 1954 and funded by members of the Big Island State Park Founders Association. A bronze plaque listing the people involved with this project and the creation of the state park on Albert Lea Lake is on the boulder at the right side of the photo. -- Ed Shannon/Albert Lea Tribune

Prior to 1947, a large group of area citizens were trying to promote the idea of having a place called Big Island designated as state park. At that time the island was heavily wooded, owned by 17 people, and divided into what were called wood lots. There was a real concern that the trees would soon be cut down for lumber and fire wood. This fear ended when the state legislature passed a bill in 1947 designating this area on Albert Lea Lake as Big Island State Park.

Two people can be credited as being promoters of this state park. One was Owen Johnson, a conservationist, amateur archeologist and lifelong area resident. The other person was Helmer Myre, a world class wrestler, former Albert Lea police officer and Freeborn County sheriff, state representative and senator who helped with the park’s legislative action. Myre died in 1951, and in 1953 the state legislature renamed the place as Helmer Myre State Park. 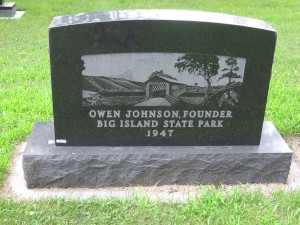 This gravestone in St. Theodore’s Cemetery serves two purposes. First, it marks the gravesite for Ellen Johnson, who died in 1981, and her husband, Owen, who died in 1987. Second, it clearly proclaims Owen Johnson as the founder of Big Island State Park. -- Ed Shannon/Albert Lea Tribune

In 1954 the promoters and members of the Big Island Founders Association raised money to build the present picnic shelter structure.

A bronze plaque was reportedly created to be placed on a boulder near the picnic shelter. However, one of the names of founders association was omitted from the original plaque. The present plaque was put in place during July 1982. (There’s still an error on this plaque; the name of a 1954 Hayward banker should be C.J. Katzenmeyer.)

Johnson is listed as the association’s president; L.W. Spicer, vice president; and Nate Whitney as secretary. There are also names of 19 members on the plaque, plus the Albert Lea Evening Tribune which strongly promoted this state park with editorials and publicity.

Not far from this picnic shelter is a building designated as the Owen Johnson Interpretive Center. 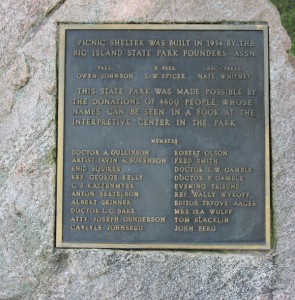 Before his death in 1987, Johnson had a tombstone placed at the gravesite for he and his wife in St. Theodore’s Cemetery proclaiming his status as the founder of Big Island State Park.

In 1990 State Representative Bob Haukoos was a co-sponsor of a legislative bill renaming this area based on Albert Lea Lake as Myre-Big Island State Park.