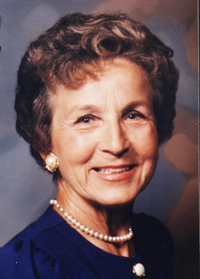 Memorial services will be at 11 a.m. Saturday at Peterson Brothers Funeral Home in Willmar. Visitation will be one hour prior to the service. Memorials are preferred to the Alzheimer’s Association.

Donna was born Jan. 29, 1928, in Hancock, the daughter of John and Grace (Hubbard) Eckstein. She grew up on the family farm and graduated from Brooten High School in 1945. She moved to Minneapolis, where she attended beauty school and worked at Marquette Bank. Donna then moved to Hollywood with her sisters for a short time. She moved back to Minnesota and married Donald James Skimland on March 6, 1954, in Minneapolis. They made their home in Minneapolis. Donald’s career later moved them to Belgrade and Albert Lea. While in Albert Lea, Donna worked as the office manager at the Albert Lea Freezer Warehouse, retiring in 1986. For several years, Donald and Donna spent their winters on South Padre Island, Texas, and their summers on Games Lakes near Sunburg. Donna enjoyed her many flower gardens, travelling, walking, art, sewing, baking and spending time with family. Donna was a wonderful wife, mother, grandmother, sister and friend and she will be deeply missed.

She was preceded in death by her parents and five half siblings.