Lou Vada was born April 12, 1914, in Pineville, La., the daughter of William and Emma (Tyler) Farnell. She attended public school in Tioga, La. She spent the majority of her life in Louisiana and Minnesota. In January of 1963 she was united in marriage to Robert Hall. 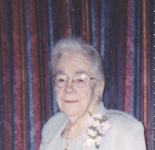 Lou Vada opened the Salvation Army Store in Albert Lea, and was the store manager from 1953 through 1970. She was a member of the Salvation Army and active in all of their activities including the Ladies Home League. In her free time she enjoyed gardening and flowers.

She was preceded in death by her parents; husband Robert, son Jerry in infancy, brother William Farnell Jr., and sisters Omera Guillory and Omeatha DuBois.