Not long ago a small group of men were inspecting the veterans’ memorial at Graceland Cemetery. Not far from this memorial they found a flat tombstone nearly covered with grass and debris. A closer check on this sunken marker revealed it was for Glaydon Iverson, 1917-1941. 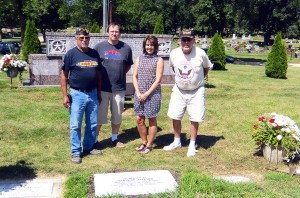 The installation of the new memorial marker in Graceland Cemetery for Glaydon Iverson was made on Aug. 11. Among the people participating in this event were, from left, Joe Avelar, adjutant, and Greg Sundholm, quartermaster of Chapter 16, Disabled American Veterans, Linda Helgeson of Lake Mills, Iowa, Iverson’s niece, and Forrie Claussen, past commander of Chapter 16. -- Photo courtesy Gretchen Claussen

This specific name had special significance for several of the men, especially Forrie Claussen, past commander of Albert Lea’s Glaydon Iverson Chapter 16 of the Disabled American Veterans.

The initial reaction for the group was the thought of finding the grave site for the first member of the nation’s armed forces from Freeborn County to die during World War II. However, there were several reasons for this to be questioned.

First, Iverson grew up in Emmons and graduated from the community’s high school in 1936. Second, his photo is embedded into the tombstone for his parents, Edwin and Anna Iverson, in Oak Lawn Cemetery just west of Emmons on the State Line Road. Third, the U.S. Army Quartermaster General’s Office, Rosters of World War II Dead (all services) confirms that the body of U.S. Navy Fireman 3rd Class Glaydon Iverson was “nonrecoverable.” 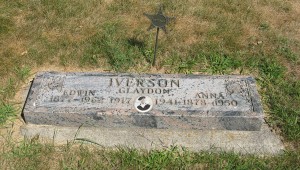 This is the tombstone in Oak Lawn Cemetery west of Emmons that honors the memory of Glaydon Iverson, the first serviceman from Freeborn County to die in World War II. He died Dec. 7, 1941, during the Japanese attack on Pearl Harbor. -- Ed Shannon/Albert Lea Tribune

Iverson was serving on the Battleship Oklahoma on Dec. 7, 1941, while it was docked in Pearl Harbor, Hawaii. He was one of the 429 sailors and Marines to die when Japanese aircraft hit this ship with at least three torpedoes.

Just when this second tombstone for Iverson was placed in Graceland is now unknown. The nearby memorial listing the county’s casualties from four war periods, including Iverson’s name, was originally installed during 1947. Also, who was responsible for this particular marker seems to be a mystery.

However, there’s no mystery regarding the new marble marker honoring Iverson that replaces the older version in Graceland Cemetery.

Claussen contacted Ron Vogel, sales manager of Albert Lea’s Star Granite Works, regarding a replacement marker. Vogel decided to donate a new marble marker at no charge because he felt “it was the right thing to do.” 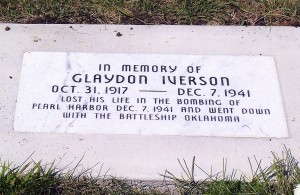 Here’s the new marker for Glaydon Iverson that was installed on Aug. 11 in Graceland Cemetery just to the south of the Freeborn County Veterans’ Memorial. -- Photo courtesy Gretchen Claussen

“The rebuilt stone really looks great and sure is an upgraded tribute to Glaydon’s honor and I believe was overdue,” Claussen commented.