Sighting or hearing owls does not portend death

“Everything is nearly copacetic. My dream job is falling asleep at a desk. When I played football in high school, the coach wanted me to be asleep by 9:00. If I could get to school by 8:45, I was sound asleep by 9:00. I’d been training for a desk job. Have I ever told you my views on the education system? I think that when a student is disruptive in class, instead of suspending him or her, a parent should be required to spend an entire day attending every class with that child.”

“That’s easy for you to say, being the perfect student,” I add.

“Oh, I admit to bringing home a report card with a D on it — probably in conduct. I didn’t want to set Pop off on a tirade. I took a pen and carefully put a little dash in the middle of the D, making it into a B. My scheme failed.

“I should have used the same color ink that my teacher had. I had a health scare. Medical researchers discovered a new disease that has no symptoms, is impossible to detect, and there is no known cure.”

“Fortunately, no cases have been reported thus far.” 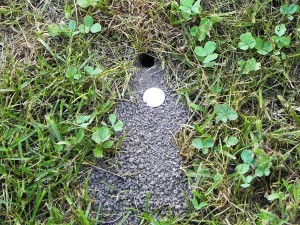 Photo of a cicada killer wasp’s tunnel compared to a dime by Al Batt.

Each day brings surprises. Most days are easier to paint than to describe. I watched a cardinal at the feeder. It’s the best redbird in my yard. A red beyond words.

A barred owl called, “Who cooks for you? Who cooks for you all?” The owl added an odd sound not unlike the “Hoo-ah” that Al Pacino made in the movie “Scent of a Woman.” It brought back memories of old Tarzan movies on TV. In that cinematic African jungle, I regularly heard the crazed laughter of a kookaburra as Tarzan swung from a vine. That bird was one that always picked up where it left off. Commercial breaks were the only things capable of quieting the kookaburra — a kingfisher that sings in Australia, not in Africa.

A blue-gray gnatcatcher landed on a shepherd’s hook holding a bird feeder. The gnatcatcher, tiny and long-tailed like a lollipop, isn’t a feeder bird. It might have been pursuing insects.

I waited for Tarzan or a kookaburra to appear but they did not. Entering the house, I heard from someone who described a bird seen in Sweden. I identified it as a nutcracker.

A suite bird on a sweet day.

“The Curious Case of Benjamin Button” is a movie about a man who lives his life backward. An adaptation of an F. Scott Fitzgerald story, the film is a meditation on mortality and time’s relentless passage. A ship’s captain befriending Benjamin admitted that he wanted to be an artist. He used that talent to tattoo a hummingbird on his chest. The hummingbird’s wings formed the symbol for infinite. Upon the captain’s death, Benjamin observed a hummingbird far out to sea. The hummingbird represented eternity and appeared after the deaths of major characters, depicting the soul’s ascent to heaven. There are those who claim that the sight or sound of an owl portends death. I visited Sax-Zim Bog in 2004-05, drawn there by an irruption of northern owl species that had come to the bog in search of food. There were thousands of owls seen by many people. I spent time in Meadowlands, a city with a population of 134, in Saint Louis County. If that superstition held true, Meadowlands would have been wiped out.

Paul Schwab, of Owatonna, told me that he had been having trouble with raccoons raiding his bird feeders. He said that one even unscrewed a feeder and allowed it to fall apart. Raccoons are good at what they do. I know I would recognize Paul’s nemesis. It would be the raccoon wearing the tool belt.

David Hernes, of Albert Lea, asks how long it takes snapping turtle eggs to hatch. It’s common to see females moving across roads during the egg-laying season in June. Females normally select sandy areas to dig nests in riverbanks, shoulders of roads, driveways and lawns. Females lay up to 30 eggs and cover nests with soil. Predators (raccoons, skunks, foxes and mink) destroy most nests. The eggs hatch in 50 to 120 days, but I’ve been told that if the eggs are laid late in the season, they may not hatch until spring. Temperatures during incubation determine the sex of the hatchling turtles. Lower temperatures produce mainly males and higher temperatures predominantly females. Snapping turtles are omnivorous, eating carrion, crayfish, frogs, snails, fish, toads, snakes and small mammals. Snappers typically eat more plant matter than anything else. Small prey are swallowed whole and larger prey items are torn apart by jaws and front claws.

“What wasp or bee can sting more than once? Most of them. The prime exception is the honeybee, which is a single-shot.

There will be an audubon trip to the University of Minnesota Raptor Center, Mill Ruins Park and Upper St. Anthony Falls Lock and Dam on Sept.17 with registration by Sept. 3 through Community Ed at 379-4834.

According to a story in The New Yorker, 80 percent of the world’s population eats insects.

To an ant, an aphid is honeydew on tap. The ants crave the sugar rich, sticky substance and put a chemical fence around the aphids to corral them. Ants sometimes bite off the wings of aphids to keep them from escaping. In return, ants drive off aphid predators.

“There are no seven wonders of the world. There are seven million.” — Walt Streightiff