“Everything is nearly copacetic. I have a nervous stomach. It’s worried that it’s not getting enough food. I have a hunger meant for a bigger man. Skillet sold me his old cell phone so that I could stay in touch with the people I don’t want to talk to. I call him Skillet because he once got beat up by a Perkin’s waitress. I bought the phone because I felt sorry for Skillet. I got beat up every day by a neighbor when I was a kid.”

“I remember. That pastor didn’t like you,” I add.

“And I don’t like the phone. Do you know what the difference between a trampoline and a cell phone is?”

“You take off your shoes before jumping on a trampoline. I took my new phone to that fitness place that is open 24 hours a day, except on Sundays when it’s open 25 hours. You can exercise whenever you feel like it even when you don’t feel like it. They have so many pieces of exercise equipment there that a guy doesn’t know where to start. I worked out on one machine for over an hour before someone told me that it was a coat rack.”

It was one of those moments that I wish everyone could have.

I heard the calls of young Baltimore orioles sounding like something between a cheep and a whistle.

A male oriole brought three fledglings into visit the grape jelly feeder. He looked harried — like a young father with triplet tots at the fair. The oriole was a good dad. He picked up bits of jelly in his bill and fed it to each of his youngsters. He made sure to feed them equally. After some time, one of the young birds jumped down to the feeder and fed itself. I thought that must be like the first time I rode a bicycle by myself. A terrific feeling.

Not long after I wrote the above, Cheryl Overland of Albert Lea told me essentially the same story as it happened before her eyes.

Our yards and parks are the Discovery, Animal Planet and National Geographic channels all rolled into one. 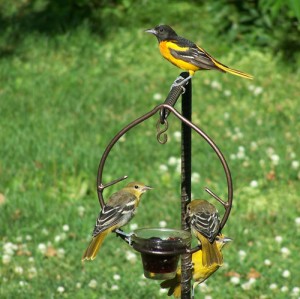 Photo of orioles near a jar of jelly by Al Batt.

It was one of those rare mornings where there was nothing to hurry about. The mosquitoes had not yet begun to work the crowd. I walked just fast enough to allow my thoughts to keep pace. I strive to be a walker-thinker. On occasion, I succeed. I walk and observe. Long ago, I learned that I could not be expected to understand what was going on in the world if I didn’t notice what was at my feet. A man should observe close things. It is an ancient and honorable tradition. I walked with a sense of adventure. I marveled at the calls of the rose-breasted grosbeaks. They sounded like the squeak of good basketball shoes being worn by players in a gym. I wore old shoes. Perhaps they were too old. After the hike, I discovered that the shoes had gnawed a bloody spot on the back of each of my heels. Why do old shoes attack? Do they sense a weakness? Have they changed? Have I? It gives me something to think about on my next walk.

The day was a “Where’s Waldo?” book, and I was Waldo. Deerflies found me. They are about the size of houseflies and are mostly yellow, brown or black with varying stripes. Deerflies have brilliantly colored eyes, ranging from gold to green, and their wings are usually marked with dark patterns. Most deerflies attack people around the head, neck and shoulders. The females bite humans and animals in order to obtain a blood meal to feed their eggs. The males feed on pollen and nectar. Deerflies are most likely to attack on warm sunny days. Deerflies are attracted to dark moving shapes, carbon dioxide and warmth. They use their knife-like mouthparts to slice the skin and feed on the blood pool created. They inject an anti-coagulant into the bloodstream while feeding. To reduce exposure to bites, it is best to wear light-colored clothing, including a light baseball cap.

Leviticus 11:13-19 says, “And these are they which ye shall have in abomination among the fowls; they shall not be eaten, they are an abomination: the eagle, and the ossifrage (bearded vulture), and the osprey,

From Marion Poellot of Red Wing, “Hearing the downy woodpecker hammering away on the downspout makes me wish I was more familiar with Morse code.”

“A naturalist in a hurry never learns anything.” — Gerald Durrell

“Every day do something that will inch you closer to a better tomorrow.” — Doug Firebaugh