Allen R. “Al” Kaderabek is a strong promoter of Albert Lea as the place for the good life. And to prove this he has created the equivalent of a traveling poster promoting the city on the back of his new motor home. 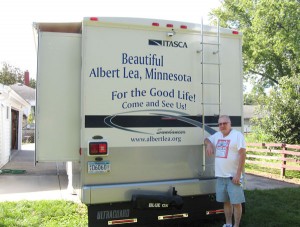 Al Kaderabek stands next to the new message on the back of his motor home that promotes Albert Lea for its good life and serves as an invitation to visit the city. He plans to take this message west during a planned trip to Arizona in a few months. -- Ed Shannon/Albert Lea Tribune

He purchased the motor home with just 8,000 miles on the odometer a few months ago. One of the first changes he made was to have an invitation to visit the city or website painted on the back of the vehicle by Ad Art.

“So far I’ve been to the Winnebago Rally in Forest City, Iowa,” he said in reply to a question regarding where the vehicle has been so far this summer.

Kaderabek commented that several people at the rally liked the message, especially a couple from Alden.

He says Albert Lea is a clean and scenic town with many assets. One of those assets he mentioned is Edgewater Park. Thus, he decided to promote the community with the new message on the back of his motor home.

“I hope to get to Arizona this winter. I like to go all over that state, but my choices are Mesa, Casa Grande or Lake Havasu City,“ he remarked.

For this trip he plans to tow a car behind the Winnebago. And during most of this winter season trip to the southwest he’ll be promoting Albert Lea as a beautiful place to visit for its good life.

Kaderabek commented he’s been to Arizona for six winters, spent one winter in Florida, and the last two winters in Albert Lea.

“I like Arizona the best because it’s hot and dry with lots of sunshine, “ he said.

Kaderabek grew up in the Hollandale area, served with the U.S. Army in Germany, worked at Wilson & Co. for 33 years and became a real estate agent until retirement in 2000.

In his retirement Kaderabek does a lot of bicycling in the Albert Lea area, plus on the route between Red Wing and Cannon Falls and in the Lanesboro region. He also volunteers as a driver for the ride service that transports veterans to and from the Twin Cities and Rochester.

He enjoys using slogans or sayings to explain his outlook on life. One is, “Life is good as long as you feel good.” Anther favorite on his personal card is, “Hang on to what is important to you!” Still another of his favorites is on the back of one of his T-shirts with the message of “Live Your Dreams.”

“That’s what I’m trying to do,” he emphasized.