Cascading leaves hit the ground with a whisper

“Everything is nearly copacetic. My bread has become hard and my crackers soft. There is no bottom to worse. My family drives me nuts, but everyone has family problems. At least mine aren’t as bad as Furry Murray’s.”

“His family is confusing,” I admit. 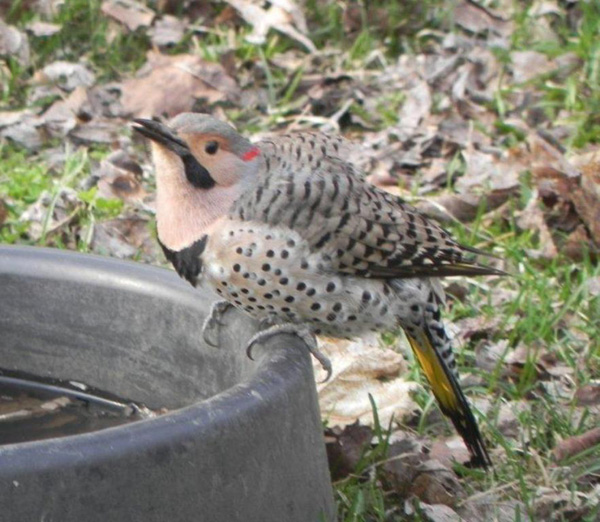 Photo of a flicker bird by Al Batt.

I love it when the trees resting upon the last hill of summer have been fired with colorful leaves and the weather becomes variable but bearable.

If you’re confused about when to set your clocks back or ahead, just remember this simple rule, “You gain an hour every fall and you lose an hour every time you watch an episode of Desperate Housewives.”

Fall is the time when we try to remember where we put all the Christmas decorations. It’s a time we spend recovering from summer and preparing for winter. Cascading leaves hit the ground with a whisper. Fall is when it smells like pumpkins, leaves turn yellow, goldfinches turn green and birds of passage move through.

Harlan Lutteke, of Alden, asked where common grackles go in late summer. Most grackles nest in colonies. Nesting completed, they form large flocks and often feed in fields where they may damage crops.

Tracy Vandegrift, of Albert Lea, asked how to keep bees away from hummingbird feeders and wondered what is making the divots in her lawn. The Cornell Lab of Ornithology recommends using basin feeders. The design puts the sugar water out of reach of flying insects, while allowing hummingbirds to reach the water. If the feeder has yellow parts, paint them red. Yellow attracts bees and wasps. You could try moving the feeders or removing them for a day. The hummingbirds will find the new location quicker than the insects will. Make a weaker syrup concentration of one part sugar and five parts water. It will continue to attract hummingbirds but insects will not find it so enticing. Some feeders are equipped with bee guards. Unfortunately, some of these feeders are prone to dripping which undermines the effectiveness of the bee guards. The divots are the work of a skunk, raccoon or squirrel. Squirrels cache or retrieve buried corn and acorns. It is likely the labor of skunks or raccoons. Skunks dig holes in search of grubs. Skunks are systematic, moving from spot to spot each night. Raccoons shred or roll the grass in search of grubs. Skunks do a neater job.

Daphne Hamborg, of Emmons, asked, “Are bats really notorious rabies-carriers or are they being unfairly maligned?” Dogs, cats, horses, cattle and other domestic animals usually become infected after being bitten by a rabid skunk. People are generally exposed to rabies by bats, dogs, cats or livestock. Animals that aren’t a rabies risk in Minnesota are birds, hamsters, guinea pigs, gerbils, rabbits, squirrels, chipmunks, rats and mice. The percentage of infected bats is very small, according to a University of Florida study it is less than 1 percent. Although incidence of rabies in bats is low, a bat with rabies may show no outward sign of infection. Therefore, whenever handling a bat, always protect yourself by wearing leather gloves. Any bat bite should be considered serious.

Barb Lamson, of Mankato, found a dead hummingbird perched on a feeder and wondered about it. When hummingbirds sleep at night, they go into a hibernation-like state called torpor. A hummingbird consumes 50 times as much energy when it is awake (its wings beat 53 times per second) as it does when torpid. A hummingbird’s heart rate can drop from 500 to as few as 50 beats per minute and its body temperature lowers to 70 degrees Fahrenheit from its normal 105 degrees. When hummingbirds go into torpor, they appear as if they are dead and have been found hanging upside-down. It can take up to an hour for a hummingbird to recover fully from torpor. Torpor can be fatal to a weak or hungry hummingbird. There are many reasons why a hummingbird could die at a feeder. Hummingbirds don’t live very long. When a bird perches, it bends its legs. This tightens flexor tendons running down a bird’s leg and causes the toes to curl, thereby clinching firmly to the perch and holding a bird in place.

“Where are eastern meadowlarks and western meadowlarks found in Minnesota?” If you drew a line from approximately the Lake of the Woods to Albert Lea, anything west of that line would be western. You could see both on the other side. Westerns like large fields with few trees. Easterns prefer smaller fields with more trees and meadows or pastures with taller grass.

“Do Bounce fabric softener sheets repel mosquitoes, wasps and ants?” Only if you swat them with the box the sheets come in. University studies have shown that they might work in repelling fungal gnats.

“If I were given the opportunity to present a gift to the next generation, it would be the ability for each individual to learn to laugh at himself.” — Charles Schulz

“The sky is the daily bread of the eyes.” —Ralph Waldo Emerson