Co-op in Hayward celebrates its centennial

Editor’s note: This is the first in a two-part series.

HAYWARD — For a full century the Farmers Elevator Co. and later Hayward Cooperative has been a vital part of life in this community. This fact was confirmed with a special centennial celebration held at the Hayward Town Hall on Aug. 22 attended by about 275 people.

A centennial pamphlet issued by the firm included this capsule history: 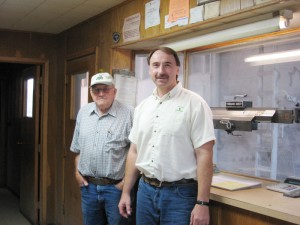 Paul Westland, left, an employee of the Hayward Cooperative from 1955-1993, visits with the present manager, Robert Wittmer, in the elevator’s scale room. -- Ed Shannon/Albert Lea Tribune

“The original Hayward Elevator facility was built in 1903 by the S.Y. Hyde Grain Company with George Peterson as manager. The elevator was sold to the La Crosse Grain Company, who in turn sold it to the Farmers Elevator in 1911 for a price of $4,750. The Farmers Elevator Company merged with the Community Co-op Oil Company in 1979 and changed the name to the Hayward Cooperative.”

Through the years what’s considered to be one of the last independent grain cooperatives in the area has seen many changes. In prior years the firm sold six kinds of coal, Minnesota brand machinery, fencing, seeders, livestock feeds and equipment, petroleum products and receiving and shipping corn and other grains. Now the emphasis is on corn, soybeans and fertilizer.

During the era when coal was an important fuel for homes and businesses, the firm handled as many as 25 railroad cars a year. In fact, this cooperative may have been one of the last retailers of coal in the county.

The merger with Community Co-op Oil Co. resulted in retail outlets in Hayward and Hollandale. Both were discontinued about two decades ago. 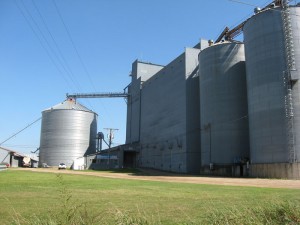 The dominant aspect of the skyline in Hayward is the grain elevator next to the railroad tracks and near the County Road 26. This part of the Hayward Cooperative started 44 years ago, however, this firm is now observing its centennial.

During the past century the focus of the cooperative’s activities have gradually shifted from the original elevator on Hayward’s east side next to the railroad tracks to the west and the present grain bins and office site. The major shift came in 1967.

The present manager is Robert Wittmer. He has been an employee for 31 years and general manager since 2005.

“Loyalty of our customers, patrons (cooperative members) and employees have made this place successful,” Wittmer said.

Wittmer says there are a hundred active members in the cooperative. David Paulson has been president of the cooperatives board of directors since 2002. Mike Ellingson has been the board’s secretary since 2008. Other board members are: Vern Frydenlund, Tony Kermes, Loren Lair, Al Ravenhorst and Tracy Skaar.

Next week: An update on the pending changes for a historic Hayward landmark.