HAYWARD — During the past 108 years the original grain elevator in Hayward has had three owners. One of these owners with two names, Farmers Elevator Co., and now Hayward Cooperative, has used this small elevator as a part of its operations for a full century. The last usage was as a feed mill up to March of this year. Now the cooperative’s board of directors has decided to tear down the building. 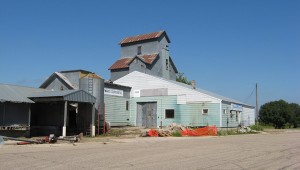 This 108-year-old building in Hayward is scheduled for demolition within a few weeks. For a full century it has been a part of the Farmers Elevator Co, now Hayward Cooperative. During those years it was a grain elevator and later a feed mill. -- Ed Shannon/Albert Lea Tribune

The small elevator next to the railroad tracks was built on Hayward’s east side for the S.Y. Hyde Grain Co. in 1903. Samuel Hyde was originally from Lanesboro and one of the first partners of William Wallace Cargill. The Cargill family lived in Albert Lea from 1870 to 1875, and he actually started the famous firm in this city. In later years Hyde started his own grain elevator business. However, he evidently maintained an association with the Cargill firm after it moved to La Crosse, Wis. This may help to explain how the La Crosse Grain Co. acquired this elevator about 1906. The cooperative’s present general manager, Robert Wittmer, said the Cargill name appears on several legal documents for the La Crosse firm. And it was this firm which sold the building to the Farmers Elevator Co. in 1911. It was this sale for $4,750 that became the start of operations for the firm organized by a group of Hayward area farmers, (The name was changed to Hayward Cooperative in 1979.) 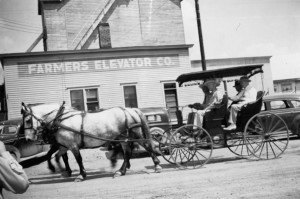 On June 11, 1949, a parade was held in Hayward as part of the state’s territorial centennial observance. One of the participants riding in the buggy going past the Farmers Elevator was Carl Lunde of Hayward. He’s in the front seat nearest the camera. Lunde was president of the elevator’s board of directors from 1931 to 1940. -- Photo courtesy Freeborn County Historical Museum

This elevator with its capacity of 15,000 bushels of grain became the site of business for the new cooperative. In time, a coal shed, feed warehouse, several new grain bins, facilities for fertilizer and a new office structure were added to the west along the railroad tracks. Thus, during the past century the focus of operations for what’s now the Hayward Cooperative has shifted from the east side to the present facilities on the community’s west side.

“Our big project this year is to take down the obsolete elevator,” Wittmer said.

Yet, there’s one part of the pioneer elevator that’s going to be preserved for the future. It’s a Fairbanks hopper scale. Wittmer explains this original equipment scale with its cast iron parts has already been prepared for removal. The new home for this rare scale is the Freeborn County Historical Museum and the move is scheduled for Sept. 20.

“It’s time for that building to go,” Wittmer declared. 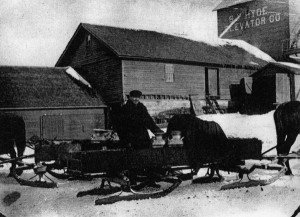 This photo of the S.Y. Hyde Grain Co. elevator in Hayward was reportedly taken between 1903 and 1911. Now the pioneer structure will soon be just a memory of the past.