Moments amid the monuments in D.C. 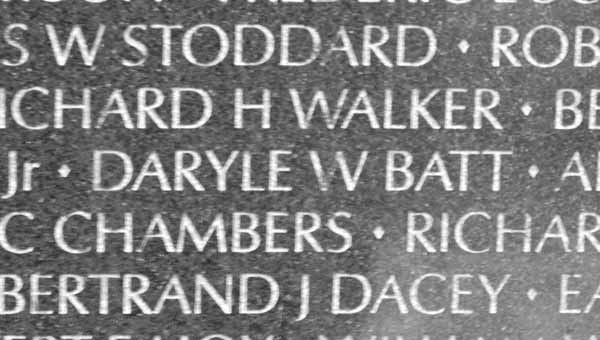 The name of Daryle W. Batt, a cousin, can be seen on the Vietnam Veterans Memorial. -- Al Batt

WASHINGTON — There were no signs reading, “Nothing happened here.”

My grid became locked. I spoke in Washington, D.C. It was an honor and an opportunity to investigate our nation’s capital. I wore an “I vote” sticker just to frighten others.

JFK said that Washington was a city of northern hospitality and southern efficiency. Washington has a population of 600,000. It was initially 100 square miles, but was reduced to 68.3 square miles by a retrocession to Virginia. Taxicabs breed in large numbers there. I saw a man nearly hit by a taxi while walking to the Metro in Union Station. Why not? He was walking and likely to take the subway. He was of little value to the taxi driver. The Metro, the second busiest system in the U.S., is used by 700,000 people daily. Cherry trees dot the iconic landscape and bloom during the first 10 days of April. I’m highlighting a few places that I visited.

The Capitol features Lady Freedom on the dome. Lady Freedom is a big woman, standing 19 feet 6 inches tall and weighing in at 15,000 pounds. Some folks claim that we’re not getting all the government we are paying for. Others maintain that we are getting too much. Some people come to Washington to see government in action, others to see government inaction. Milton Berle said, “You can lead a man to Congress, but you can’t make him think.”

Washington is where people who have everything come to beg for more. Lines in Starbucks were slower than other parts of the country. Probably because there is more governmental involvement. George Washington supposedly threw a dollar across the Potomac. Money went farther in those days.

The Library of Congress is breathtaking — paintings, statues, mosaics, a Bible collection (Giant Bible of Mainz and Gutenberg Bible) and 615 miles of shelves.

By law, no building in Washington can be taller than the Capitol other than the Washington Monument. That marbled obelisk, completed in 1884, stands 555 feet 5 1/8 inches tall. There is an elevator to the top. Stairs were once available but were discontinued due to vandalism and heart attacks. Very few vandals suffered heart attacks.

There are 18 Smithsonian museums in Washington. If a man were to spend a minute looking at each museum exhibit, it would take him 89 years to see all of them. My favorite is the Natural History, featuring stones and bones. It houses the Hope Diamond.

The World War II Memorial has 4,000 gold stars honoring the 400,000 killed. I knew that one close relative had died during that war but learned that 46 other Batts were included in that number.

The FDR Memorial is a thoughtful place. There is a statue of his wife, Eleanor, the only First Lady to have a statue in a presidential memorial.

The Martin Luther King Memorial is a large relief of MLK sliced from a mountain. The stone is etched with the words, “Out of the mountain of despair a stone of hope,” from his “I have a dream” speech of 1963.

The Vietnam Veterans Memorial is a simple, yet powerful wall of 58,272 names highlighting the individual sacrifices of those who died. I paused by the names of three soldiers carrying my last name. My cousin Daryle is on panel 26W, line 59.

The Korean War Memorial displays 19 statues of infantrymen reflected in granite. They become 38 soldiers. The war was fought over the 38th parallel.

The Lincoln Memorial features a 19-foot Lincoln surrounded by 36 Doric columns, one for each state at the time of his death. The Lincoln Memorial is the most reproduced building in the world, thanks to its image on pennies and $5 bills. I tried not to say, “Is statue, Abe?” The Jefferson Memorial is a domed rotunda encircling a 19-foot statue of Jefferson. The monuments are illuminated at night.

To visit the White House, you need to apply months in advance and be checked out thoroughly. The White House’s first tenant was John Adams. Andrew Jackson had running water installed. The White House has 132 rooms, 35 bathrooms, 412 doors, and a bowling alley.

I took several five-mile walks through history and rain. I didn’t carry an umbrella for fear of putting an eye out. I was amazed at what I saw, but I’m prone to wonder.

The most important things for traveling are the ability to be amazed and comfortable shoes.