Recalling the era of local sidetracks

Between the Corn Rows

On July 8 and 15 I wrote columns based on the Farmland fire of a decade ago and the present portion of the city now known as Blazing Star Landing. And one detail I tried to stress is that this area still has access to two railroad lines.

Back in the days when this area was a Wilson & Co. meat processing plant, the firm really took advantage of those two railroads. The Milwaukee Road was on the south side and the Rock Island was on the north side. Sidetracks from both lines were once used to bring in livestock, processing supplies and coal for the power plant and to ship out processed meat products to customers all over the nation. 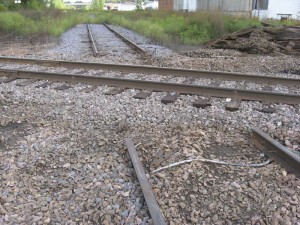 The trains still go by every day on the Iowa Chicago & Eastern tracks on the south side and on the Union Pacific tracks on the north side. However, the sidetracks or sidings are no longer there.

In fact, there are very few of the once numerous sidetracks still left in Albert Lea. This helps to reflect the fact that nearly all transportation of goods into and out of the city is now based on trucks and trailers.

Yet, years ago having access to a railroad and a special sidetrack was a major asset for so many local firms. This is still a very obvious fact which can easily be proven with the locations of so many local factories, processing plants and warehouses near present and even former railroad routes.

During the past three or four decades most of the local sidetracks have been removed. In a quick survey of the city’s present railroad lines I found just four sidetracks. One of these is just to the south of East 14th Street on Myers Road. A second set, hard to detect, is in the same neighborhood. The third set is just north of West Front Street and detectable at the South Pearl Street and Euclid Avenue crossings. I was unable to find the switch location and see much of the trackage because of the weeds. The fourth large set of well-used sidetracks is in front of the present Union Pacific depot.

While we’re on the topic of local railroad tracks, retired Minneapolis and St. Louis Railroad employee Denny Galagan reports that one of the city’s two “diamonds” has been eliminated. He explains that a diamond is based on the trackage where two railroads cross routes.

The diamond recently eliminated is just north of the West Front Street crossing. It’s now very obvious that the Iowa Chicago & Eastern Railroad (aka Dakota, Minnesota & Eastern) has full use of the tracks and the Union Pacific trackage between Curtis and Hartland has taken another step toward eventual elimination.

The city’s second still active diamond is near the railroad crossings for ICE and Union Pacific lines on South Newton Avenue.

While interviewing Al Kaderabek for the Sept. 4 Lifestyles article about his motor home message promoting the city, I was reminded of another aspect of his life.

During his years as both part-time and full-time real estate sales, Al used the innovation of the “talking house.” This was a low-power radio message with his voice on a continuos loop promoting the assets of a specific home for sale. The radio message was broadcast on a frequency that could be received on a car’s radio within a block or two of a residence with a real estate agent’s sign out front.

With just three exceptions, Ed Shannon’s column has been appearing in the Tribune every Friday since December 1984.