“Everything is nearly copacetic. I clipped a toenail last night and knocked over a lamp with the flying clipping. I read the horoscope each morning. Those things scare me, depress me, or give me false hope. That’s why I read only the horoscopes of others. I put on a clean bowling shirt the other day to get an MRI.” 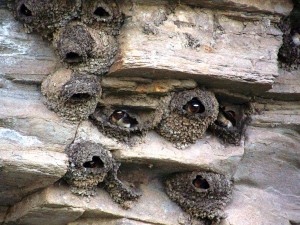 “Nothing. I wanted to find out if I was claustrophobic. Cletus and I went shopping yesterday. I don’t like shopping. It’s like pulling out my chest hairs one at a time with a pliers. I shop because I can’t make Dr Pepper by tossing peppers into a blender and I composted my dirty clothes. Cletus would have won the high school state wrestling championship if he hadn’t hit his opponent with that folding chair. He’s cheap. On school picture day, his entire family got into the picture with him. Cletus, being tighter than the belly skin on a Viking offensive tackle, took me to one of those dollar stores. I enjoyed being there. I can buy things that don’t work for only a dollar.”

I watched chimney swifts never land. The flying cigars twittered overhead. Chimney swifts stop flying only to nest or roost. I watched their flight, and I wanted it to never end. I became Duke Ellington singing, “The birds in every tree. Are all so neighborly. They sing wherever I go. I guess I’m just a lucky so and so.”

At the state fair, Mark Seeley, University of Minnesota meteorologist and climatologist, forecasted a prolonged fall and a warmer and wetter winter than normal, with most of the precipitation coming in early and late winter.

I checked the Farmers’ Almanac and the Old Farmer’s Almanac, and they say the winter is going to be colder than normal with average to above average snowfall with most snow falling in early to mid-December, early to mid-February and mid-March.

Winters in Minnesota are getting warmer, especially at night. January is our snowiest month on average. December is second and March third.

Millie Westland, of Hayward, asked if hummingbird nectar should be sweetened during migration. The water to sugar ratio of 4:1 is typical of the sugar concentration found in many flowers used by hummingbirds. There is no concrete evidence that stronger sugar concentrations hurt hummingbirds, but a 3:1 mix spoils faster than 4:1, and 2:1 is too syrupy and is a waste of sugar. In hot weather, when energy demands are not as high for hummingbirds, you could cut the mix to 5:1 or 6:1.

Dan Dittrich, of Albert Lea, asked what the knobs on pelican bills are for, how many eggs they lay, where they nest and if their numbers are increasing. In breeding season, a nuptial tubercle or fibrous plate develop upon the upper part of an adult’s bill. The tubercle falls off when the mating season has ended. The female typically lays two eggs in a depression on the ground or on a mound of vegetation and dirt. Both parents incubate the eggs that hatch in about a month. They prefer islands that are isolated from predators and human disturbance for their nest sites. Studies show that American white pelican populations have been increasing steadily at a rate of about 3.9 percent per year. A pelican eats three to four pounds of fish each day. Early in the 20th century, the pelican population declined due to disturbance of nesting colonies, fluctuations of water levels and pesticides.

Gary and Steph Altfillisch, of Albert Lea, asked why there was a dearth of birds at their feeders. With birds out of the nest and moving to wherever there is food, they are less likely to frequent the same feeder. Many parent birds molt in late summer. Molting uses up huge amounts of energy and makes them wary and quiet. With nesting complete, there is a reduced need for singing. Goldfinch activity drops off at feeders when they spread out among weedy fields and hedgerows for nesting sites. The goldfinch population has increased now as the young are introduced to the feeders. Migration has already begun. The insect-dependent birds tend to move south first as the insect supply lessens with cooler weather. Often these same birds arrive latest in the spring. Many birds are simply taking a break from our feeders and feasting on weed seeds and berries that aren’t available to them at other times of the year. The birds will be back soon if not already.

“What are those purple things in trees?” They are emerald ash borer traps used by the Department of Agriculture. The USDA will collect the traps and check for the destructive insects.

“Why do I seldom see a dead bird?” Birds that are ailing tend to hide. They die in places unseen. Scavengers such as cats, dogs, coyotes, raccoons, beetles, skunks, crows, vultures, etc. make quick work of any dead birds they find.

Monarch butterflies feed hungrily in the fall. They need nectar to fuel their migration. They must eat enough to gain the fat they need to survive a winter in Mexico.

I saw a bird feeder mounted on the handle of an aged spade stuck in the ground. A shovel would work as well for a unique feeder.

“Life is like a landscape. You live in the midst of it but can describe it only from the vantage point of distance.” — Charles Lindbergh

“Autumn is a second spring where every leaf is a flower.” — Albert Camus