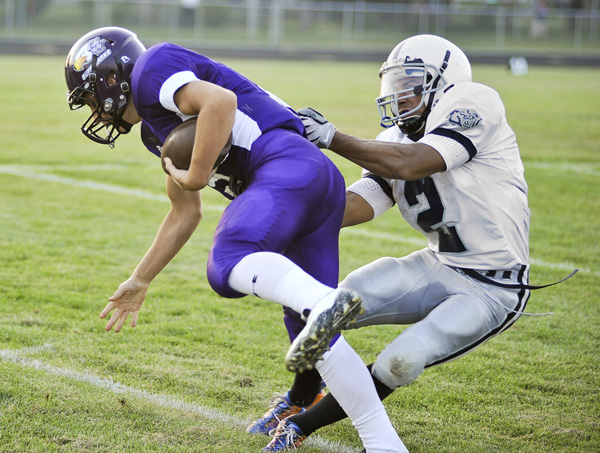 GRAND MEADOW — Whatever the Superlarks had left in their gas tank, they probably left it on the football field Thursday night.

Grand Meadow survived a hot, humid night with a 28-25 win over Glenville-Emmons in their season opener.

Bain, who had 200 total yards of offense and scored three touchdowns, cramped up after the final score and fell to the ground.

“That was a personal mistake,” Bain said. “I know I didn’t prepare my body correctly for this game and I knew it was going to be hot. This game came to no one man’s success, it was the whole team. We have a lot of new bodies and our line is smaller, but we’re quick and we’ve got heart. We’ve got nine guys out there that are going to play one hundred percent every play.”

The Superlarks (1-0, 1-0 Southeast) jumped to an 18-8 lead in the third quarter when Bain followed his blockers for a 45-yard scoring run down the right sideline and he busted through the middle while breaking a few tackles on a 65-yard score.

The Wolverines’ Perry Kirsch ran the ensuing kickoff back 85 yards to set up a 10-yard run by quarterback Wyatt Madson to make it 18-14 with 5:22 left in the third. The Wolverines took the lead in the fourth after Derek Olson ran for five yards on a fourth and three and then scored on a two-yard plunge.

Bleifus, who ran for 65 yards, scored GM’s only TD in the first half on a six yard run. He also scrambled for 25 yards on third and three on GM’s game winning drive, but he knows his team could’ve played better.

“We’ve got to work harder in practice and get in shape,” he said.