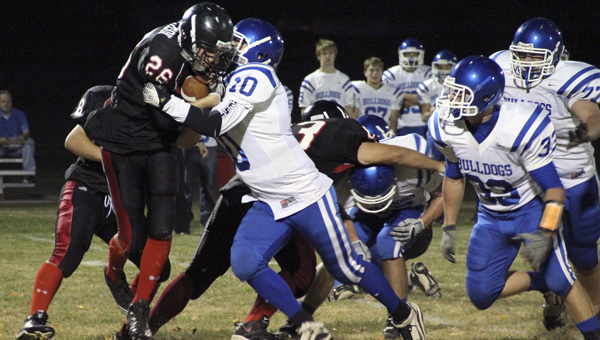 Matt Erickson gets stood up at the line of scrimage by a host of Bulldog defenders. Erickson carried the rock nine times for 35 yards in the 26-6 loss. -- Garrett Wampler

Some players limped to the huddle and others’ eyes filled with tears.

But even in the emotional setting of defeat, there was an desire from the players to move forward, learn from their mistakes and improve for next week.

“They want to come in Saturday and watch the tape,” said A-C head coach Nick Willaert. “They’ll do anything they can to get better.

“They watch film on Saturdays and it’s Homecoming Week. It just goes to show they want to learn and they want to get better.”

Junior quarterback Jordan Johnson coughed up a fumble and threw three interceptions during the Knights’ loss to the Bulldogs on Friday night.

J-W-P (2-4) scored on their second possession of the game after a 41-yard, nine-play drive. The Bulldogs converted on two fourth downs and Sawyer Gahler hooked up with Joshua Stockman in the back corner of the end zone on a 15-yard pass for the score.

It looked like the tide would change in favor of the Knights early in the third quarter after Johnson completed a deep 53-yard strike down the middle of the field to Deon Skinner. Then the sophomore running back was stripped of the ball on the 8-yard line and unable to recover the fumble.

“You dig yourself a hole and you can only go so deep before you can’t get out of it,” Willaert said. “We shoot ourselves in the foot, falling behind by whether by turnovers or penalties.”

On the ensuing possession, Gahler scrambled out of the pocket, broke through a Knights attempted tackle and tip-toed his way down the sideline on a 95-yard touchdown run.

Less than a minute later, Johnson threw his first of three interceptions, all to Billy Steinhauer. The Bulldogs’ cornerback returned this one 28 yards for the score.

“We focused this week on keeping ourselves out of those situations,” Willaert said. “Even with the success you have during the week in practice, you have to translate it over to the field. We didn’t do that this week.”

Alden-Conger finally found the end zone in the fourth quarter on a Johnson to Skinner 14-yard touchdown pass, pulling the score to 20-6 with 7:03 remaining in the contest. Skinner finished the game with four receptions for 122 yards and the score.

Joe Galler scored the final Bulldogs touchdown on a 1-yard blast up the middle and across the pylon.

The Knights played their last home contest of the season and will now travel to Cleveland next Friday night in search of their second win of the season.

See the Scoreboard on Page 1B for a complete box score.