“Everything is nearly copacetic. There’s an echo in my house. I can’t get rid of it. It’s driving me crazy. I have to listen to the Vikings lose twice every week. What can I expect? I live on Earth, a planet named after a worm. I’ve been spending time at the Gotcha Gun Club. We’re writing a troubleshooting manual. Weasel had a pheasant fall dead in his yard. Some city slicker driving a lime green rig pulled in and claimed he’d shot the bird. Weasel maintained the bird was his because it was on his property. The guy said he was a lawyer and would sue Weasel for everything he had if he didn’t give up the rooster. Weasel doesn’t have anything but agreed to settle the disagreement the traditional way.”

“Weasel would kick the lawyer, and then the lawyer would kick Weasel. They’d keep doing that until one gave up. The lawyer warned Weasel that he was a kick boxer and agreed to the contest. The instant he consented, Weasel kicked him hard in the groin. The lawyer crumbled to the ground. He moaned for 20 minutes before rising painfully and saying, ‘Now it’s my turn.’ Weasel said, ‘Forget it. You can have the pheasant.’” 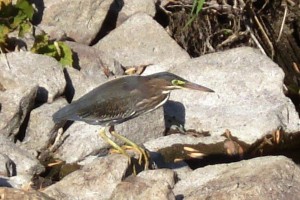 Photo of a green heron by Karen and Bruce Shelstad of Fairmont.

It was a morning of that time of year when I’m not sure whether to wear a T-shirt or a parka. What I was certain of was that I needed to walk. I’m a self-appointed surveyor of natural things in my yard. My spirit dragged my body outside.

Though the light was heavily slanted, the trees had already become wind instruments. Crows kicked up a ruckus in the woods as the wind tugged at stubborn leaves. I wondered how many leaves had to fall before the wind relented. Flights of leaves piled in spots like lost things that had been found. They brought memories of similar days with them. The autumns when I endeavored to catch a falling leaf before it touched the ground. If I accomplished that feat, I made a wish. It gave the day an exclamation point.

I’m programmed so that a nod to a falling leaf evokes sheer amazement at the mysteries of nature. As a boy, I caught leaves and made wishes. It was a ferly — a curious occurrence. I caught a leaf this year. I wished that my ability to be amazed would continue to grow.

“What do ants do when it rains?” They get wet. As a rule, most soils are porous and that means they usually have pockets of air where the ants can find oxygen. They don’t need much air to begin with.

“How do birds survive the heat?” Birds don’t sweat. They keep cool by staying out of the sun as much as possible, taking baths and panting, which allows cooler air to carry heat away from their lungs. They also flutter their throats, expelling heat from a tangle of heat-carrying blood vessels found there. Birds can raise feathers and hold wings out for air circulation.

“What are my chances of seeing a praying mantis here?” Not good, unless it was one that someone released for pest control. You are more likely to see a walkingstick — a lovely, flightless insect.

“What do you think — could Wile E. Coyote catch the Roadrunner?” With or without the help of Acme Corporation? A roadrunner is able to hit 20 mph. A coyote is recorded running at a speed of 43 mph. That would lead me to believe that Wile E. could catch a roadrunner.

“Do you have a nickname for the starling?” I occasionally call the European starling the “Kmartin.”

“How long do monarch butterflies live?” In Minnesota, adult monarchs live 2 to 6 weeks, except the generation that migrates from here to Mexico. They could live up to eight months.

One of the few birds known to use tools, the green heron attracts prey with bait (feathers, insects, small sticks, earthworms or berries) that it drops into the water.

I saw several birds this year that were fighting with gazing balls in gardens. They were battling with their reflections.

The painted lady may be the most widespread butterfly in the world.

There are 1.8 million species in the world. The International Institute for Species Exploration named its top 10 discoveries of the year. Among them is a mushroom that glows in the dark and bacteria found on the remains of the Titanic.

Struthio camelus is the largest living bird species on the Earth, and among the most unique. The species name Struthio camelus comes from the Greek words meaning ‘camel sparrow.’ This name was chosen by the Swedish scientist Carl Linnaeus to describe the elongated neck of the species. The ostrich is endemic to Africa.

Accompany your appetite to Cross of Glory Lutheran Church in Hartland on Nov. 2 from 4:30 to 7 p.m. at the soup and dessert dinner. Slurpers are welcome.

“I do not understand how anyone can live without some small place of enchantment to turn to.” — Marjorie Kinnan Rawlings

“The place to improve the world is first in one’s own heart and head and hands.” — Robert M. Pirsig