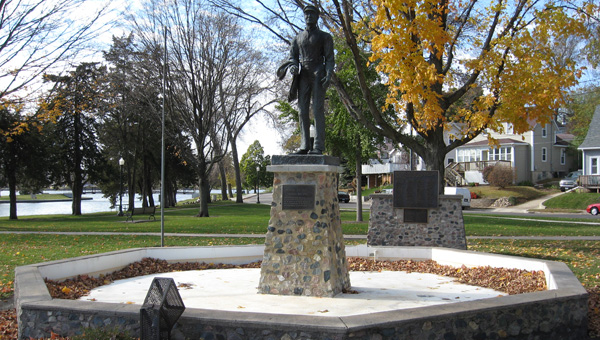 The Danish Immigrant statue in New Denmark Park was created by George Bassett of the Winnebago area, cost $12,000 and was dedicated in July 1981. The plaque in the background lists the names of donors, and many were members of the Danish Brotherhood Society. -- Ed Shannon/Albert Lea Tribune

For just over 117 years Danish Brotherhood Lodge No. 75 was an important part of life in the Albert Lea area for immigrants from Denmark and their descendants. Now this pioneer ethnic organization has decided to cease operations. Thus, on Oct. 13 the local lodge held their last meeting at Wedgewood Cove Golf Club. 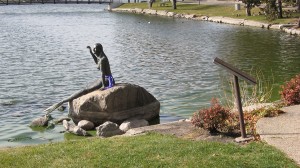 The mermaid statue near the edge of Fountain Lake and next to New Denmark Park is based on the famous statue in Copenhagen, Denmark. However, unlike the Danish version, the Albert Lea statue dedicated in September 1994, also created by George Basset, is waving a greeting to folks passing by. The plaque on the right lists donors who made this statue possible.

For Holger “Buzz” Knudsen Jr., former lodge president, the Wedgewood location has special significance. He said part of this property next to Pickerel Lake was homesteaded by his grandfather, Nels Knudsen, in the late 1880s. His grandfather, a Danish immigrant, was one of 34 charter members who started what was originally named Dannebrog Lodge No. 75 on April 16, 1894.

A history of the early years of this organization prepared by Marion Hanson for the 1988 Freeborn County Heritage book said, “The young people of the lower class in Denmark realized they had no future in that country. United States was the promised land for them at that time. Many of these immigrants had no money. They were sent money from those established here, then they could work here and repay lenders. …

“These Danish immigrants for the most part could not speak English and the customs in this country were entirely different. Many were lonesome in this strange land. They felt the need for getting together regularly as a group that could speak the Danish language and keep alive the customs of their beloved homeland. In this period of time there was no Social Security nor welfare. The brotherhood would help members out of work by giving them $4 a week for 13 weeks. The women organized a similar society called the Danish Sisterhood and they would help the wives by bringing groceries and helping with the children. 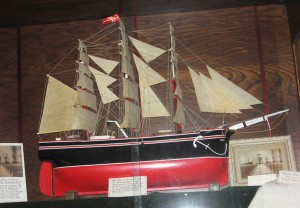 This small wooden ship model was created by Christian Jensen and suspended from the ceiling above the altar in Trinity Lutheran Church. Its purpose was to remind Danish-Americans how they came to this nation. The sailing ship is now in a display case in the church’s Jacobsen Fellowship Hall.

The other organization for local Danes was the Danish Sisterhood Dagmar Lodge No. 60 which was organized on July 24, 1902, with 21 charter members. This lodge ceased operations about 2002 and the members shifted membership to the Danish Brotherhood Society.

In 1910 Lodge No. 75 purchased a lot at the corner of East Clark Street and North Newton Avenue for the construction of a new hall. Proof of the DBS connection with the present building can be seen with the emblem etched into the stonework near the top on the Clark Street side.

The first floor was originally used for the Nelson and Sorensen Clothing Store. Several local organizations also used the hall and dining area for their activities.

Knudsen said the DBS held Saturday night dances for many years, plus Christmas parties. Hanson wrote, “The basement was equipped as an eating place for 100 people. The biggest social event of the year at that time was the Thanksgiving Day dinner. Each man paid $1 for a meal, whether married or single. The meal was prepared by the Sisterhood, and with labor and food being donated, it was a money making event. For many years the Brotherhood served a Danish Torsk supper.”

In 1947 Freemond Madson Post 447 of the Veterans of Foreign Wars purchased the building and remodeled the first floor portion. Their emblem in stone is still above the Clark Street entry. The VFW ceased using the building about 1996. Several other business ventures then used the building which is now unoccupied. 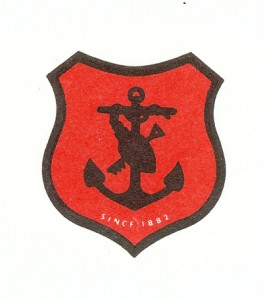 During the past few decades the lodge met at the Senior Center on Maple Hill Drive.

Several factors were involved with the decision to terminate Lodge No. 75. One was the ages of the members. Another was based on winter conditions locally for some members, plus other members going south or west during those months. Still another reason cited is based on a “different era.”

The organization that used the slogan, “Denmark is our heritage, but America is our home,” has made several significant contributions to local life. One is renaming Lincoln Park to the more meaningful New Denmark Park. This emphasizes the fact that Albert Lea’s north side beyond the dam at the outlet of Fountain Lake was once a neighborhood known as New Denmark. And in this park area are two statues the DBS strongly promoted to honor the city’s Danish heritage.