When the Minnesota Waterfowl Association recently set up their new Hall of Fame at the organization’s headquarters in Hopkins, the appropriate decorative atmosphere was obtained from an Albert Lea home.

Richard A. “Dick” Lindell had about 200 mounted ducks and geese in his home on North Bridge Avenue, plus a replica of a portion of an old hunting shack in the basement. It took two trips in June by Brand Nylin and Dale Eggert of the MWA, plus former Albert Lea resident Tom Tubbs who now lives in Rosemount, to carefully dismantle and move all the items to Hopkins. 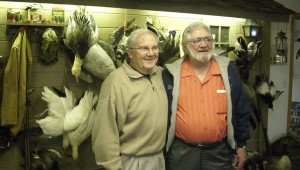 The new Minnesota Waterfowl Association Hall of Fame in Hopkins held an on open house on Sept. 21. Among those attending this event were former Albert Lea resident Tom Tubbs, left, and Richard Lindell who donated the mounted waterfowl and hunting memorabilia from his local home to the association he helped to organize 44 years ago. -- Photo courtesy Minnesota Waterfowl Association

On Sept. 21 Lindell and his wife, Delores, went to Hopkins to see these relocated reminders of the past in what’s now the Minnesota Waterfowl Hall of Fame.

For Lindell, this involvement with the Minnesota Hall of Fame is very personal. He was one of the first 11 sportsmen and conservation promoters to be inducted into this hall on Feb. 6, 2010. In fact, four of those inductees were from Albert Lea. They were Lindell, Tubbs, Ray Hangge and the late Robert Head.

The four local residents and hunters were cited for organizing what they called the Southern Minnesota Waterfowl Lake Improvement Association in February of 1967. This was soon changed to the Southern Minnesota Waterfowl Association. By 1970, their campaign to improve waterfowl and wildlife habitat, clean up the waterways, prevent further drainage of wetlands and fight against the ravages caused by carp began to gain the attention of other sportsmen, conservationists and the state’s Department of Natural Resources. As a result, and with the help of lobbying, publicity and a newsletter, the Albert Lea organization soon included new chapters in Waseca, Owatonna, Faribault and other communities. And in time the organization expanded even further and made a more realistic name change in 1977 to the present Minnesota Waterfowl Association with headquarters in Hopkins.

Lindell, a retired mail carrier for the Albert Lea Post Office, was an avid waterfowl hunter from the 1940s to the ’90s. In this area his favorite locations were Bear, Freeborn and Geneva Lakes. In later years he and several friends made yearly hunting trips to the Canadian provinces of Manitoba and Saskatchewan. 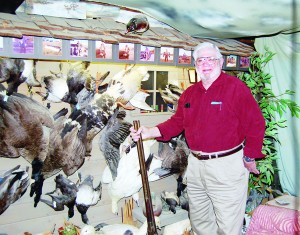 This photo was taken in May 2007 for a Tribune Prairie Profile. It shows Dick Lindell in his home with the many reminders of his years of waterfowl hunting. Now all these mementos of the past have been donated to the Minnesota Waterfowl Association for a new display at their headquarters and Waterfowl Hall of Fame in Hopkins. -- Mike Simmons/Albert Lea Tribune

During those yearly ventures the ducks and geese he shot became additions to his food choices, plus inspirations for the home’s decor. Those waterfowl were turned over to several area taxidermists for realistic recreations. In time, Lindell had several hundred waterfowl in various mounted reproductions. Now nearly all the waterfowl, plus the replica of a side of a hunting shack have gone north to the MWA headquarters in Hopkins.

“I was flabbergasted. They did what I hoped they would do. It was just amazing how much it was like it was here. I’m glad I made the donation,” was Lindell’s initial reaction to the new display in Hopkins.

In a note he sent to the MWA Lindell wrote, “Thank you, thank you, thank you for accomplishing exactly what I had in mind and hoped for when I decided to donate the waterfowl collection to the Minnesota Waterfowl Association, so that the heritage of waterfowling might be known and appreciated by future generations.

“They will now live and fly forever in the eyes and hearts of all who enter and see what we are trying to accomplish.”