If the glass slippers fit 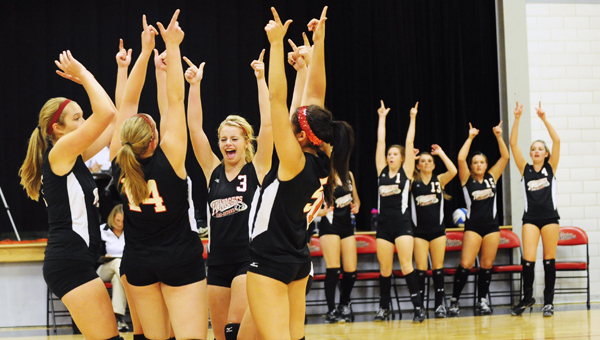 For the Alden-Conger their story began with a 3-2 come from behind victory over the Martin Luther/ Granada-Huntley-East Chain Knights (4-22) on Monday night in the Section 2A girls’ volleyball opening round.

“I told the girls we have all the tools,” said Jolene Bute, Alden-Conger’s head coach. “We just need to put them all together right now.

‘We can be the cinderella team. I truly believe that.”

A-C entered the tournament as the No. 7-seed after finishing the regular season with an 8-17 record. 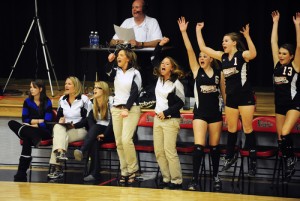 Head coach Jolene Bute and the rest of the Alden-Conger bench erupt during Monday's opening round section 2A victory over ML/GHEC.

After winning the first set in dominating fashion, A-C dropped the next two games, setting up a win or go home scenario for the Knights.

Waters wasn’t going to let that happen and left it all on the court to do so.

After trailing as late in the fourth game as 17-16, the Knights worked their way back into the lead and closed out the victory on a thunderous Waters spike straight down center court setting up the tie-breaking Game 5.

A-C jumped out to an early 3-0 lead, but surrendered a number of points to ML/ GHEC on three service errors and allowed two aces.

Holding a slim 10-8 advantage, Kelsey Behnke stepped to the service line and buried an ace into the heart of the ML/ GHEC defense.

Ariel Keller slammed down the 11th point before Waters went back to work, scoring points on a block and delivering the final three kills of the game.

“I felt so confident when Brittany was in the front row at the end of the game, I knew we were going to win,” Bute said. “I had that much confidence in her.” 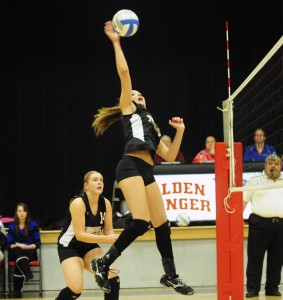 Brittany Waters attempts one of her 24 kills during the game. Waters, a sophomore, led the Knights back into the contest and secured the win in Game 5.

Both teams exchanged the lead 15 times during the second game. Miscommunication on the A-C side allowed the opponents to slip away with two straight game, 24-26 and 15-25, before the Knights rebounded during the final sets.

Next up for the Knights will be a stout test against the No.2-seed Martin County West.

“Right now I think we can peak,” Bute said. “We just need to be a little more consistent and get the job done.”