Making call of a barred owl was a hoot

“Everything is nearly copacetic. Life is as tough as a steak at Chewy’s Café. I’ve learned never to buy steak that comes with a lifetime guarantee. I miss the good old days when someone else pumped my gas for me. It was cheaper then. I need some peace and quiet. I’m going to buy a phoneless cord. I tossed and turned. I was all over the nap. Not being able to sleep, I went out on Lake Inferior with Still Bill, a rumor in his own time, in a rented boat. We were in pursuit of walleyes. I love them fried, and Still Bill enjoys a chilled glass of freshly squeezed walleye juice. We hit a spot of fishermen’s dreams. We were unable to avoid catching fish. It was amazing. I told Still Bill, he has the world’s shortest “to do” lists, that we’d better mark the spot so we could come back and catch more fish. Still Bill marks the side of the boat with his leaky ink pen. I swear, he was born dumb and he’s getting dumber by the day. I think he’s lost the use of his head.”

At the Midwest Birding Symposium, I took part in an effort to get into the Guinness Book of World Records. I was one of 801 people who did the call of a barred owl. It was a hoot. 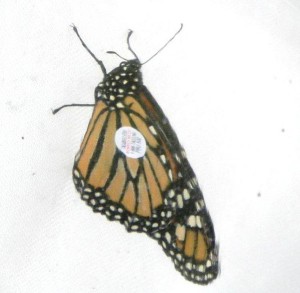 Photo of a tagged monarch butterfly by Al Batt.

Bruce Armstrong, of Hartland, asked why his wild plums produced no fruit this year. Many factors must come together for a successful pollination. Pollen maturation with a receptive pistil, pollinating insects, lack of strong winds, the right amount of rain, no cold weather at inopportune times and energy to produce the fruits. An early or late frost can disrupt fruiting. A cross-pollinator should be nearby and in bloom sequence with other plum trees. Many things need to be right for a successful fruit set

Audrey Shepard, of Florida, asked, “Why are robins’ eggs blue and does the robin hear the worm or see the worm?” Robins search for worms by sight not by hearing. It looks as if they are listening because of the placement of their eyes. Blue eggs blend in at the bottom of a dark nest that is screened by leaves from above. This could help hide the eggs from predators. Scientists have noticed that many birds that nest in cavities and other dark places lay white eggs. Birds that lay their eggs in open nests on the ground tend to be camouflaged to match their background.

Marion Poellot, of Red Wing, wrote, “A cardinal appeared to have most of its head feathers missing. I wonder if it had a bad case of mites or lice. I saw a blue jay with a similar problem. Is there anything I can do to help these poor critters?” A cardinal can pull off that look. It keeps him cool on hot days like the buzz cuts of my boyhood years did for me. I see blue jays and cardinals in this “bald” condition each year. Some folks insist it’s a case of mites that causes the loss of head feathers. Anything is possible, but I believe there is another reason. Birds molt throughout the year and an abnormal molt occurs on some birds that cause them to lose their head feathers simultaneously. The feathers grow back so there is no need to start a Hair Club for Birds.

Nancy Skophammer, of Albert Lea, asked if turkeys ever attack people. Once extirpated from Minnesota, wild turkey restoration has been successful. It began when 29 adult wild turkeys were trapped in Missouri and released in Houston County in 1971-73. As turkey populations expand, so do their interactions with people. As turkeys become acclimated to humans, some turkeys, usually young males (jakes), may become aggressive and chase people and pets. Growing up on a farm, I observed similar behavior from ganders and roosters.

Kathy Mock, of Ohio, inquired as to what the formula for determining the temperature via cricket chirps is. I think that the first time I ever saw this tip was in a Mark Trail newspaper comic. The frequency of chirping varies according to ambient temperature. A. E. Dolbear studied this in 1897. He systematically researched various species of crickets to determine “chirp rates” based on temperature. Snowy tree crickets, which sound similar to sleigh bells, sing through the night. Some people call them “temperature crickets.” Count the number of chirps this green cricket makes in 15 seconds. Add 40 to that number and it should approximate the temperature in Fahrenheit. This formula is called Dolbear’s Law.

Larry Johnson, of Indiana, wrote, “Is there a spray to keep bats away?” Possibly. Some people claim good luck by using nontoxic dog repellent spray on bat roost sites.

When fish break water and bite eagerly, expect rain. Trout jump high when rain is nigh.

When a katydid’s song goes from “Katie-did” to “Katie,” there will be frost in 10 days.

The frost is out of the ground when you hear the first frogs of spring.

When ditches and ponds offend the nose, look for rain and stormy blows.

Be careful when walking under a walnut tree on a dark and windy night.

Hummingbirds are territorial. Because they have high metabolisms and need to eat frequently during the day — every 15 minutes or so — they protect their food sources by chasing other hummingbirds away.

The Minnesota Department of Natural Resources found that pheasant populations are down 64 percent from 2010. Mourning dove numbers are 26 percent lower than 2010.

“Shared laughter creates a bond of friendships. When people laugh together, they cease to be young and old, teacher and pupils, worker and boss. They become a single group of human beings.” — W. Lee Grant

“A birdie with a yellow bill, hopped upon the window sill, cocked his shining eye and said: ‘Ain’t you ’shamed, you sleepy-head!’” — Robert Louis Stevenson