A product once made in Albert Lea was featured in the July/August issue of the Saturday Evening Post magazine. 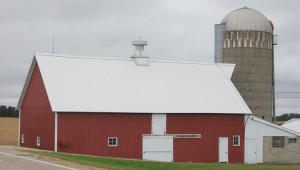 There are still cupolas, many made by the Olson Mfg. Co., on the barns in the Albert Lea area. One of the best examples is on this barn near the corner of County Roads 17 and 71 southwest of the city. -- Ed Shannon/Albert Lea Tribune

The headline on this article is, “Take it from the top — Saving the fast disappearing barn cupola for posterity.” And on page 28 is a quotation by Richard Mayers of Albany, located west of St. Cloud. He said, “Cupolas built in southern Minnesota — often in the Albert Lea area — are absolute works of art.”

Mayers is considered to be an expert on the sheet metal and wooden ventilation units that are still visible on the roofs of area barns and some former creameries. In fact, Mayers is a collector of these reminders of rural life from the past. The article says he has 55 cupolas in his personal collection so far.

The local tie to the cupola topic is emphasized on page 28 of this magazine issue with a photo of an old Olson cupola, or what an Albert Lea firm once called a roof ventilator. 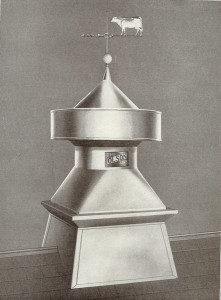 This illustration from an old Olson catalog shows a standard cupola which was sold to be placed on barn roofs as part of the building’s ventilation system. This particular model had four flue sizes and was made in Albert Lea. -- Graphic courtesy Freeborn County Historical Museum

Albert Lea’s Olson Mfg. Co., still located at 620 S. Broadway Ave., once had the motto of “everything for the barn.” The firm’s products for many years included stalls, stanchions, penwork, waterbowls, hay handling equipment, barn cleaners, electrical ventilation and the rooftop cupolas.

One of the firm’s old catalogs indicates there were three basic models of cupolas with 17 different flue diameters. Some of the cupolas had the added feature of ornamental balls and weather vanes on top.

The cupolas were once custom made in the building still located at the corner of South Washington Avenue and West Front Street. When the Olson firm used this building it was known as the “tin shop.” However, despite this name, the cupolas were made of galvanized sheet metal. And for many years the Olson employee who crafted what Mayers calls “works of art” was the late Al Towne.

A comment in the firm’s old catalog says “All Olson cupolas are fitted with large, plain, substantial bases which can be fitted to any pitch of roof. The exhaust head is fitted with screen to keep out birds.”