This book. “Dogs in the Hot Moon,” is written by his great-grandson, Michael Sheehan. It’s based on the man known as the “Fighting Irishman” and “Savior of Fort Ridgely” and his part in Minnesota’s history. The publisher is Inspired Originals Publishing House of Munds Park, Ariz. (near Flagstaff), and the first edition is dated May 28, 2011. 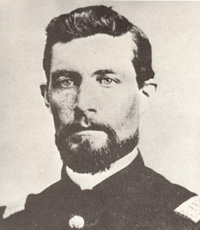 The Arizona connection with the book based on a phase of Minnesota history comes about because the author, who was born in St. Paul and spent most of his life in this state, is now retired and living in Grand Canyon. Yes, there’s a town with that name near the famous canyon and national park.

Perhaps the best way to describe this book is to call it a history of the Sioux Uprising and Albert Lea’s Company C, Fifth Minnesota Regiment. That’s right, a unit of 50 area volunteers comprised a full one-third of the troops and civilians who fought the Indians during the two battles at Fort Ridgely. This fort’s site is now a state park and located about 16 miles northwest of New Ulm.

The focus of this book is based on the year 1862. Yet, some background about this Irish immigrant should fit in right here. He was born in Ireland during 1836, was orphaned at age 2, came to the U.S. in 1850, then to Albert Lea in late 1856. Sheehan worked at Ruble’s sawmill, farmed and was the township clerk when the Civil War started in 1861. He became a private in the state’s military and advanced to the rank of lieutenant colonel during the Civil War, which included about a year on the Minnesota frontier.

Lt. Sheehan wasn’t at Fort Ridgely when the Mdewakanton Sioux along the Minnesota River rebelled and started to kill the pioneer settlers. His unit was on the way up north to Fort Ripley when the order came to return immediately to Fort Ridgely. Now I don’t want to give away part of the book’s narrative, except for the following details.

When Lt. Sheehan and Company C arrived back at Fort Ridgely, they found the frontier post in complete chaos. About 400 to 500 area settlers had gone to the fort to get away from the rampaging Sioux. There was a shortage of water, ammunition and food., and the Indians were about to attack. As the senior officer, Sheehan became the post commander.

The first Sioux attack on Aug. 20, 1862, by several thousand warriors was repulsed. The Indians then went southeast to attack New Ulm. The battle at New Ulm didn’t go well for the Sioux, so they came back to the fort for a second attack on Aug. 22 which was again unsuccessful.

The following month Sheehan was promoted to captain and in October 1862 he and Company C went south to join the rest of the Fifth Regiment to become involved with the Civil War.

At this point Michael switched the focus of his new book to what happened to the defeated Sioux, the hanging of 38 Indians at Mankato on Dec. 26, 1862. and the death of their chief and leader, Little Crow, during July 1863.

According to the author, this new book is available on Amazon, Kindle and Barnes & Noble. Hopefully it will also soon be available at the Albert Lea Public Library.

To conclude, I found this book to be an excellent historical narrative regarding an important part of Minnesota’s history.

Here’s a little puzzle challenge for the Tribune’s readers. Can the first name of a person be created by just using the first letter of the months of the year in order?

The answer is yes. Those months are July, August, September, October and November, and the result is JASON.

Next week we’ll change genders and have another of these calendar challenges.

With just three exceptions, Ed Shannon’s columns have been appearing in the Tribune every Friday since December 1984.